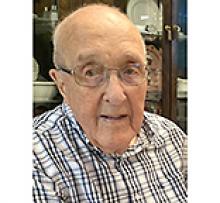 Peacefully on May 12, 2021, Jim passed away at Riverview Health Centre at the age of 96.
Jim is survived in loving memory by sons, Donald (Laurel Lee) and Bob (Helen); grandchildren, Bruce, Lorrie (George) and Joanne (Derek); and great-granddaughter Violet.
He was predeceased by his wife Phyllis; son Michael; mother Annie; and father James.
Jim was born in Winnipeg, Manitoba, one of four children born to James and Annie Salmon. At the time of the Depression his family moved for a short time to Baldur, Manitoba, where they worked the farm to provide for the family. After returning to Winnipeg, he worked at the T. Eaton Company. He joined the Navy at age 17 and served his country in the Second World War. After the war he returned to work at Eatons where he had a long and varied career, retiring in 1987.
Jim and Phyllis were married in June 1948. They were long-time residents of East/North Kildonan. In August of 2017 they moved into Devonshire Place, an assisted living complex for seniors. They celebrated their 70th wedding anniversary, just prior to Phyllis passing in 2018.
Jim loved carpentry, building and renovating homes and to this day, one of the homes he built remains in the family. He loved to play golf, curling and card games with friends and family. He enjoyed travelling, camping and attending Legion activities, as well as participating in the various activities at his Assisted Living Complex. Jim and Phyllis were also supporters of the local casinos.
The family would like to thank all involved in Jim's care and a special thank you to the staff on 3E at Riverview Health Centre.
According to Jim's wishes, cremation has taken place and a family gathering will be held once we can all gather again safely.
He was a kind, strong, loving and easy-going man. He will be greatly missed.

Condolences for the family may be left at www.alternacremation.ca