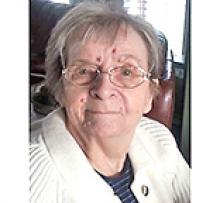 With her children at her bedside, it's with great sadness that we announce the passing of our beloved mother and grandmother, Jean Klyzub, on Tuesday, May 11, 2021, at the Swan River Valley Personal Care Home, at the age of 84.
Mom was born and raised in Meleb, MB, the daughter to Bill and Mary Warsaba. In 1954 she met Mike Klyzub and were married on Mom's birthday in 1957 and together they made Winnipeg their home until his early demise in 1993.
Mom leaves to cherish her beautiful memory, her son Bill Klyzub, daughter Karen Nemetchek (Len); grandchildren, Clayton and Eric Galuschuk and Bryce Nemetchek; brother Frank Warsaba (Lorraine); special nieces, Andrea Warsaba (Luis) and Dana Warsaba; brother-in-law Daniel Klyzub (Christine), as well as many cousins, nieces, nephews and dear friends.
She was predeceased by her husband Mike; her parents, Bill and Mary Warsaba; her father-in-law and mother-in-law Nicholas and Katherine Klyzub; her sister-in-law Ann Magolnitski; sister-in-law Sophie and her husband Tony Marchak; brother-in-law Nicholas and his wife Maria Klyzub, and nephew Nicholas Klyzub Jr.
Mom attended Machray School and graduated from St. John's High School. Right out of high school, she was hired at Shore Glass and Building Supplies on Dufferin Avenue, working until the business closed in April 1993. She then became Dad's full-time caregiver until his sudden passing the following month in May. After dealing with the devastating loss, she took some time for herself travelling to Swan River to visit Karen and tending to her garden that she loved.
She then worked at the Garden City Walmart in the jewellery department and volunteered at Age and Opportunity. Facing more health issues, Mom moved to Swan River in 2009 and was there until her passing.
Due to Covid, a small family service will be held on Monday, May 17, 2021 with interment at the Brookside Cemetery.
Active Pallbearers will be Clayton and Eric Galuschuk, and Bryce Nemetchek
The family would like to thank Dr. S. McKay, Dr. M. Adeboyega and the front-line workers at the Swan River Personal Care Home.
In lieu of flowers, donations may be made to: Heart and Stroke Foundation of Manitoba, 1379 Kenaston Blvd., Winnipeg, MB R3P 2T5 or CancerCare Manitoba Foundation, 675 McDermot Ave., Room ON1160, Winnipeg MB R3E 0V9.