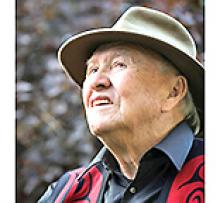 "Love lift us up where we belong."
Buffy Sainte-Marie (Up Where We Belong)

Expressions of condolence may be made at richardrosin.ca