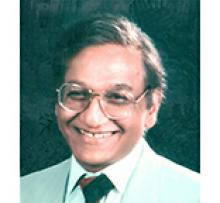 With heavy hearts, we announce the passing of Ram Kishore Agrawal. He passed away peacefully at home, surrounded by his family, after a long battle with cancer throughout which he defied expectations at every turn.
He is survived by his loving wife of 36 years, Indira; his daughters, Usha and Veena (Cameron); his sister Jamuna; and numerous nephews, nieces, and cousins.
Ram was born in Lucknow, India to a large, loving family. He trained in law in India, moved to and practised in England, and then immigrated to Canada in the late 1960s. He worked in The Pas, then served as town lawyer for Carberry for decades, before moving his practice to Winnipeg.
He was known for his kindness, generosity and humour. He counted those from all walks of life amongst his close friends. He was intelligent, well-versed not just in law, but in history, politics, religion, literature, and general knowledge. He was full of interesting stories and random facts, and enjoyed sharing them. His other favourite topic of conversation were his daughters' accomplishments. He prided himself on being a good host. As a guest, you could expect to be plied with Grand Marnier (or, in later years, Butter Pecan Ensure).
In accordance with his wishes, no funeral service is being held.
In lieu of flowers, please consider making a donation in his memory to the CancerCare Manitoba Foundation.
Special thanks to everyone who helped care for him, including the chemotherapy staff at CancerCare St. Boniface, Dr. Benjamin Goldenberg, Dr. Eren Beshara, Dr. David Hochman, Dr. Jack Rusen, and Dr. Elena Bykova.
In his honour, we invite you to follow one of his favourite pieces of advice: "Make somebody smile today." Make a donation to