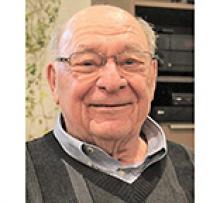 It is with great sadness that the family of Leonard Manahan announces his passing, after a brief illness, on Saturday, May 15, 2021, at the age of 92 years.
This gentle, loving, caring and wonderful man will be greatly missed by his wife of 65 years, Dorene; and their four children, Christine (Doug), Greg (Sandy), Susan (Rick) and David (Lisa). Len's memory will be cherished by his grandchildren, Lisa (Terry), Michael (Leanne), Taylor, Branden (Yekaterina), Jordan (Danielle), Christi (Alex), Ian (Elissa), Arianne (Lisa), Louis (Tara), Geneviève (Jack), Renée (Matt) and Marissa (Zan); seven great-grandchildren, Ella, Savannah, Samuel, Cameron, Ethan, Aiden and Owen; sister-in-law Diane, nephew Ward (Cindy) and family. He will also be fondly remembered by the Kwiatkoski family as well as a great host of other family members and friends. Len was predeceased by his parents, Laura Siermachesky (Tony) and William Manahan, brother Jack Manahan, and nephew Dean Manahan.
Born on September 29, 1928, in Yorkton, SK, Len spent many years working on the family farm. After graduating, he started his notable career with Rothstein Theatres Ltd. On May 12, 1952, he was transferred to Selkirk, MB as the manager of the Roxy and Garry Theatres where he met the love of his life the moment he arrived. Together, Len and Dorene built a large family and laid a strong foundation for generations to come.
Len was an honourable man that was a pillar of his community, holding the highest integrity in his family life, business and faith. He was a long-time member of the Notre Dame Roman Catholic Church. He served as President of the Kinsmen Club and was Grand Knight of the Knights of Columbus Council 6150. Upon retirement from the theatre, Len continued on to manage the Selkirk Knights Centre for many years.
Len's patient, calm, quiet nature allowed him to say so much with so few words. No matter who you were in his life, there was never a doubt in anyone's mind that they were loved, that they were safe, that they were cared for, and that he was proud of them.
A private funeral service in memory of Len will be held on Tuesday, May 25, 2021, at 11:00 a.m., at Gilbart Funeral Home, 309 Eveline St., Selkirk, MB, with Father Gerald Langevin and Father Art Seaman officiating. Interment will follow at the Notre Dame Cemetery. The service can be viewed via the link on his obituary at www.gilbartfuneralhome.com
Flowers are graciously declined, and those who so desire may make memorial donations in memory of Len to the Manitoba Lung Association, 204-825 Sherbrook St., Winnipeg, MB R3A 1M5.


Condolences may be left on Len's tribute wall at www.gilbartfuneralhome.com