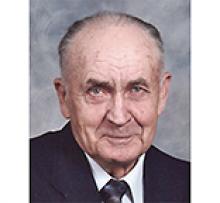 On May 14, Jack passed away peacefully at the age of 94, at the Boundary Trails Hospital, with family by his side.
Left to cherish his memory are his children, Allan (Valerie), Dwayne (Dale), Ryan (Jacquie), Lynda (Brent), daughter-in-law Marlys, his 14 grandchildren, Daniel, Monica, Bonnie (Dave), Stacey (David), Robert (Braylinn), Jeffrey (Linda), Kristina, Craig, Kristen, Rob, Ashley (Thomas), Brayden, Stephanie and Nicole, and one great-grand-daughter, Emmalyn. He is also survived by his brother Ron Schott.
Jack was predeceased by his wife Jona, son Eric (Marlys), his sisters, Velma and Hazel, and great-grandson Wilson.
Jack was born in 1927 to Martin and Margaret (Hogg) and lived in Warren where his father owned a mechanic shop. At the age of eight, while at the height of the Great Depression, his family moved to the present-day farm located northwest of Warren. Jack bought the farm from his siblings after the passing of their parents in 1953.
In his 20s, Jack went to a dance in Lundar and saw a "good-looking girl" (Jona Erickson) who he hoped would dance with him. She did and they married in 1954. Jack cherished the 65 years they had together while raising five children on the farm. As the family grew so did the farm, growing various grains along with beef cattle and hogs. Jack loved working the land and repairing machinery. He and Jona also had a large garden and enjoyed summer family corn feeds.
Jack was a hard worker and a successful farmer. He was also an avid bird watcher and photographer. He instilled in his children the love of agriculture and nature, along with a strong work ethic and commitment to family. He encouraged and supported his children's many activities. Jack had a quiet demeanour, but he also had a mischievous side that would occasionally come out!
In later years, Jack and Jona enjoyed travelling to such places as Hawaii, Kenya, Iceland, Australia including a cruise around Cape Horn. They also travelled across Canada, mostly by car, from the Pacific Rim to Newfoundland, and north to Churchill, Inuvik and Alaska.
In November 2010 they moved to Lions Manor in Stonewall. They continued to spend summers at the farm the following nine years as their grandson Daniel gradually took over the family farm.
In his last few years, he continued to demonstrate his commitment to family, as he cared for Jona through her declining health.
He will forever be remembered and cherished by his loving family.
A private interment will be held at the Warren Cemetery.
The family wishes to thank home care and the medical staff of Stonewall and Boundary Trails Hospitals for taking such good care of him.

Gone is the face
we loved so dear,
Silent is the voice
we loved to hear.

Too far away
for sight or speech,
But not too far
for thought to reach.

Sweet to remember him
who once was here,
And who, though absent
is just as dear