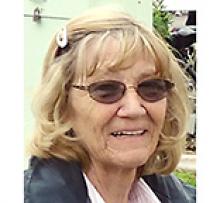 After a lengthy and courageous battle with COPD, Faye passed away peacefully with her family by her side.
She is survived by her loving husband, Alfie and son Dean Schalk; siblings, Linda Paluck, Merv Gunter (Lynda), Tricia Geurts (Albert) and Terry Gunter; in-laws, Karl and Ada Schalk, Irene Rosser and their families.
She was predeceased by her son David Schalk; mother Irene Bell (Victor); father John (Jack) Gunter; in-laws, Karl (Anna) Schalk; sister Dawn Papineau and brothers-in-law, Lloyd (Butch) Papineau, Eddie Paluck and Dave Rosser.
Faye was born and spent her early life in Selkirk, Manitoba, where she attended school and worked until she met and married Alfie. They lived in Pine Falls for a short time, and then took over the farm north of Petersfield, where they raised their sons. They farmed from 1971 to 2004, at which time they retired to a home near Winnipeg Beach. During their retirement years, they spent winters in warmer climates in the US and Mexico. Family was important to Faye and extended family and friends were always welcome in her home. Faye was dearly loved by her family, especially all her nieces, nephews, and great-nieces and nephews.
Cremation has taken place and a Celebration of Life will be held at a later date. Flowers are graciously declined and those who so desire may make memorial donations in memory of Faye to Inclusion Selkirk Fund at the Selkirk and District Community Foundation.