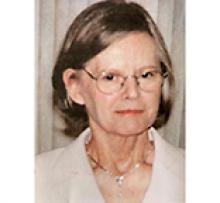 It is with deep sorrow and much love that the family of Peggy Halstead announces her passing on May 19, 2021 at 82 years of age.
Peggy is lovingly remembered by her husband of 56 years, David Halstead; her two children, Neal Halstead and Sara Pauls; her sons-in-law, Joe Slabe and Joel Pauls; her five grandchildren, Anja, Issah, Eden Slabe and Nathaniel and Melissa Pauls; as well as two sisters-in-law, a brother-in-law, three nieces, two nephews and numerous relatives and friends around the world.
Peggy was born at St. Olave's Hospital in Bermondsey, London on August 18, 1938 to Edward and Grace (Edmonds) Collins. She was just over a year old when England declared war on Germany. A child of the war, the sounds of guns and fighter planes, the terror of bombs and bomb shelters, rationing and her father away in service was her life until V-E Day. Peggy was proud of her English heritage although she lost most of her accent over the years.
Peggy moved to Canada in 1963 after a visit the year before. David and Peggy were married in 1964 and lived in Rivers, Manitoba, Moose Jaw, Saskatchewan, Kumasi, Ghana and Winnipeg, Manitoba. She served as a school trustee for 13 years in Moose Jaw and for three years in Winnipeg.
Peggy was published in Peter Gzowski's book, "This Country in the Morning" and broadcast on, and printed in, Stuart McLean's "Time Now for the Vinyl Café Story Exchange." She also published two books of short stories, notably "Teddy 'N' Me" about growing up in London during the Blitz.
Peggy worked at the Moose Jaw Public Library and one of the banks in Canada, but her favourite job was as a Ground Hostess at Victoria Station, London for BOAC, now British Airways. She shared many stories of helping passengers during the golden age of travel.
Peggy enjoyed travel and visited almost every continent and all but one Canadian province, but she always loved her home country of England.
Peggy will be remembered for her kind and welcoming personality, her sharp witty humour and her love for her family.
The funeral service will be recorded, and the family will share the link to the recording at a later date.
In lieu of flowers, the family is asking for donations to Lupus Canada.