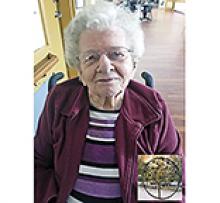 With great sadness our family announces the passing of our beloved mother, grandmother and great-grandmother, Martha Sutherland, on May 20, 2021 at the age of 97.
Martha was born on June 2, 1923 at the family farm in Waldersee, MB to Bernhard and Elizabeth Single.
She was the sixth of 14 children.
In her early years she worked in Langruth and Westbourne as a live-in housekeeper and caregiver. One sunny day around Delta Marsh, while out eating ice cream with her sister Kay, she caught the eye of the love of her life, Douglas. They were married on September 25, 1948 and settled in Selkirk, MB. Over the next four years they were blessed with three children; Donna Gail, Linda Jean and David William.
Martha was a proud homemaker and phenomenal cook and baker. As the kids grew, she began selling her baking from home. She was famous for her delicious dainties and vinarterta, which led to her employment with Rosemarie Catering, where she worked up to the position of supervisor. Many people had the pleasure of catering with Martha, and as her granddaughter Colleen can attest to, they all learned how to properly wash and dry dishes under her direction.
One of her favourite pastimes was playing bingo. Luck was often on her side and we could usually count on a nightly phone call to share news of her winnings. One of her most exciting bingo wins was a trip to Vegas. She enjoyed that trip so much that she went back the following year. This led to a love of casino bus trips, on which her daughter Donna was her constant companion. Bingo also became a family affair, with Donna, Jeannie and David joining her on a weekly outing that they all looked forward to. When at home, she could often be found watching curling or golf, and was an avid fan of Blue Jays baseball. Martha enjoyed league bowling for many years. Religion was an important part of her life from an early age, and she was a member of Christ Church Anglican in Selkirk.
Martha was grandmother to five granddaughters, who she cherished and to whom she passed on her knowledge of baking, cooking and gardening. Her four great-granddaughters were the joy of her life.
She was predeceased by her parents and ten of her siblings; her soulmate Douglas, beloved daughter Donna and son-in-law Andrew Kachkowsky.
She is survived by her loving family, children Linda Jean Atkins (Bill) and David (Addie); grandchildren: Colleen Otto (Darren), Cherisse Kachkowsky (Jamie Sagar), Jonna Atkins-Sagar (John), Heather Stanik (Beau) and Marlene Sutherland (Dan Fredrick); great-grandchildren: Kiersten Otto (Brandon), Khylie Otto, Madelyn Sagar and Brooklyn Stanik. Martha also leaves her siblings, Erna Mitchler, Elsie Langner and Alfred Single (Annie); sisters-in-law, Elizabeth Single, Iris Single and Minnie Sutherland, along with numerous nieces and nephews.
Mom was able to stay in the family home on Taylor Avenue until she was 94, at which time she moved to Red River Place. Here she was able to still enjoy her favourite activities like bingo and Sunday hymn sing. She loved to view the beautiful flowers around the grounds in the summertime. The family extends sincere thanks to the staff for their care and compassion provided to Mom during her residency there these past three years.

A private family viewing and cremation has taken place. Interment will take place at a future date.
Gilbart Funeral Home Selkirk in care of arrangements and condolences can be left on the Tribute Wall found at www.gilbartfuneralhome.com