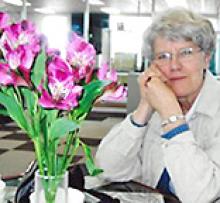 Sister Carol died peacefully in her sleep, Monday, May 17, 2021. She is survived by her brother Ray, nieces and nephews, her religious community and a multitude of friends.
She was predeceased by her parents and siblings, Leone, Agnes, Ida, Mae, Earl and Don.
Carol (Eunice) was born in St. Paul, Minnesota in 1936 and graduated from St. Jean Baptiste High School in Duluth. She entered the novitiate of the Sisters of the Holy Names of Jesus and Mary in 1955, made her first profession in 1957, and her final vows in 1962.
Sister Carol was life-long learner, achieving three Masters Degrees in Communications, Spirituality and Theology. She received the Enneagram Certification from the Riso-Hudson Institute in New York. This became a valuable tool in her ministry to others. She was committed to personal growth and the empowerment of others, especially women and those on the margins. She was a believer in non-violence and liberation theology.
Sister Carol was a teacher in the Catholic schools in Duluth and Winnipeg. Understanding the difficulties students encountered in academics, she created new courses at St. Mary's Academy - journalism, photography and psychology. She delighted in her drama students and members of the student councils with whom she worked. Sister was appreciated by her colleagues and many have remained friends to this day.
In 1983, Sister Geraldine MacNamara, founder of Rossbrook House, invited Sister Carol to start Meegwetch House, a home for teenage girls. She became a 'working mother' as she continued her teaching. For nine years, she mentored many girls, some of whom still remain in contact with her. On Mother's Day, she received a call from one of them. Sister Carol involved others in her ventures with the girls-people from Rossbrook, friends, the Sisters of Sion and the Holy Names who spelled her off so she could see to her endless corrections as an English teacher. They participated in different outings and numerous celebrations.
When Meegwetch House closed, Sister Carol left St. Mary's to become the Catholic Chaplain at Stoney Mountain Penitentiary. Carol once again found her niche. She made the chapel a sanctuary, a place of peace. Her background in education and passion for human growth helped her in her ministry with the men, bringing out the good she knew to be there.
Retiring from the penitentiary and knowing the challenges that faced the men upon their release, Sister Carol received permission from Corrections Canada to begin Next Step Peer Support Program in 1991. Participants met weekly to share and to get input on personal growth, finances, housing. Volunteers became friends and part of the family. When she stepped down as the Director of the Next Step Program, Sister Carol herself remained a volunteer.
With housing a main concern for the men, Sister Carol worked with Father Dave Creamer, S.J. to found Quixote House, a home for released offenders. Later, Father Dave with the Jesuits provided yet another housing option, Massie Apartments. One of the residents said "They tried to help me do what I wanted to do, and even if it didn't work out, the support was there." He added that "For many people it is hard to see past the mistakes a person has made; Father Dave and Sister Carol are able to do that."
Sister Carol was a strong voice for those she served. She was honoured by the Catholic Health Association of Manitoba. She was co-recipient of the Caritas Award from the Catholic Foundation and this year was named one of the 150 Women Trailblazers in Manitoba.
Important to her were friends with whom to share the journey, family whom she loved dearly, learning to be present to each person and to each moment. Those of us who loved her remember her as a loyal friend, a woman of faith, a true disciple on a mission to better the lives of others.
A Mass of the Resurrection will be celebrated at Despins Residence at 1:15 p.m. on Tuesday, May 25, 2021. Attendance is by invitation only. Interment will follow at St. Boniface Cemetery.
If you would like to view the service via Livestream, please go to the following link:

Family and friends may sign a
book of condolence online at
www.desjardinsfuneralchapel.ca.