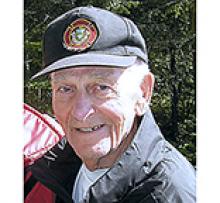 With heavy hearts we announce the peaceful passing of Walter Wilfred Nilsson at the age of 95 on Wednesday, May 19, 2021.
He will be greatly missed by all whom knew and loved him. Mourning his passing are his sons, Walter Nilsson (Tanya), Arne Nilsson (Sandy); grandsons, Matthew Nilsson (Marina, Remington and Isabella), Trevor Nilsson and Jason Nilsson. Walter was predeceased by his wife Lorain Nilsson on November 12, 2000.
Wally had a wonderful long life and appreciated all that life had to offer. His favourite interests encompassed Hockey, the Fire Department and Family. Along with his gifts for music he was a talented piano player who enjoyed entertaining family and friends.
Walter served in the Royal Canadian Navy, completing his training out of Digby, Nova Scotia. He joined the Royal Canadian Navy in 1942, serving on a number of missions in the North Atlantic until his discharge in 1946. A Second World War veteran Walter then found his calling in the Winnipeg Fire Department and eventually moved to South Transcona with his beloved wife Lorain and their young family in 1960 and where he lived until recently. He was a respected part of the community and helped build the South Transcona Community Club with many family friends.
Wally served 38 years with the Winnipeg Fire Department, he advanced and held leadership roles within the Fire Department including acting Fire Chief before he retired. Although being retired for 33 years we still run into people that have wonderful stories about his humour and they share warm memories of Wally during his long career. He formed many true friendships throughout his life in public service and within community.
Wally will now rest with his beloved wife Lorain who he would always say 'is waiting patiently for him.'
A special thank you to George and John for being such good friends, Wally was grateful to have the best friendship anyone could ask for.
The family wishes to convey their heartfelt thanks and acknowledgement to all of the staff at the Bethania Nursing Home for their compassionate and loving care during his later years in life.

You will be in our memories forever
Dear Father and Grandfather.

Should friends desire to do so, memorial donations made in his memory, to the Fire Fighters Burn Fund would be appreciated.
A celebration of his life will be in our thoughts and prayers. No service will take place and a private family burial will follow.

Family and friends are invited to share
memories and leave condolences by visiting
Wally's memorial page at seasonsfunerals.ca