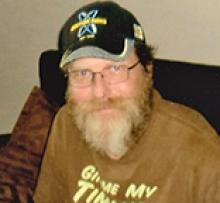 With sad hearts we announce the passing of Ernest (Ernie) Ivan Larson, of Selkirk, MB, aged 59, on May 15, 2021, after a hard battle with cancer. Your Valkyrie has taken you to Valhalla.
Ernest was born May 11, 1962 in Eriksdale, MB. He was the youngest of three and a bit of a surprise to everyone, as he liked to put it. He is survived by his sister Nadine (Gary); and his brother Darren (Laura); his nieces and nephew, great-niece and great-nephew; and numerous other family members and friends. He was predeceased by his parents, Ivan and Violet Larson.
He was raised in Vogar on his parent's farm until his teenage years when the family moved to Ashern. Being in Ashern made it easier for him to play hockey which he loved, and of course baseball in the summer. While in Ashern and then Winnipeg, he worked at many jobs over the years; gas jockey as a teen, local transport company, sewer and water repair, then back to the country to the commercial ice fishing that he loved. In the early 1990s he moved south again working for over 25 years with the R.M. of East St. Paul, lastly in the Parks and Rec Department. He resided in Selkirk, first living with his cousins, then buying a house and moving his parents in with him to care for them in their later years. While his health forced him to retire before he was ready to, and Covid curtailed many of the things he wanted to do, he did enjoy his last summer out in the country in his trailer.
Ernest was a kind and generous man with a true heart of gold. He would drop everything at a moment's notice if you needed help with anything, be it stranded on the side of the road, needing a dog sitter, or simply being that extra person for either muscle or moral support. He always made sure that all his friends were happy and taken care of before himself. Even in the last days, he was more concerned that everybody was okay than for himself.
The family and friends of Ernest would like to thank CancerCare Manitoba, home care, and the Interlake Palliative Care Program. Special thanks and biggest hugs to his team of friends and family for their support and care before and during his illness: Mona and Jerry; Chad and Jen; Leanne and John; Meaghan and "the little guy" Shaemus; Char; and Valdine. They made the time he did have left the easiest and best it could be.
A Celebration of Life will be held at a later date.