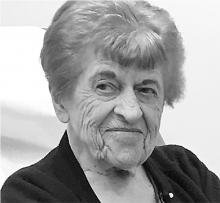 Mary Nicholson, 92, of Winnipeg, MB, passed away at her home on May 25, 2021, after a battle with intestinal cancer. She was surrounded by her loving children next to her bedside when she left this world on a beautiful spring day. Her bedroom window was open and the birds were singing, the sun was shining on her face and a nice breeze was blowing through her room.
Mary was born on a cold winter day on January 22, 1929, in a farmhouse on the outskirts of Selkirk, MB to Polish immigrants, Stanislaw (Stanley) and Jadwiga (Louise) Nieckarz (Neskar). She later lived in a small house in Selkirk with her parents and younger siblings including Walter (1930/ 2004), Frank (1931), Ted (1934/2018), Jennie (1936/2006), Louise (1938/2018), Elizabeth (1941/2005) and Carol (1950). Growing up in a big family, there was not a lot of money to go around, so Mary had to leave high school during Grade 11 to pursue employment as a waitress at Sinclair's Tea Room. She then moved to the big city of Winnipeg where she enrolled in secretarial college. Her diploma allowed her to be gainfully employed as a payroll clerk at the Rolling Mills in Selkirk for over a decade. During this time, she helped her family purchase a 1956 Chevy Impala. Mary was a bit of a fashionista and was always immaculately coifed. One of her nicknames by a close friend and colleague was "the Duchess."
Good friends of Mary introduced her to the dapper military man, Thomas Leslie (Les) Nicholson (1927/2008) and in July 1963 they were wed at Notre Dame Catholic Church in Selkirk, MB. Les whisked her away to Ottawa, ON where he was stationed in his role with the RCAF. In April 1964, Mary had her first child but unfortunately, he was stillborn at the end of gestation. He was interred at the Pinecrest Cemetery in Ottawa. Mary gave birth to three other children, Mary Louise (1965), Thomas Stanley (1967) and Sheila Anne (1969). After Ottawa, Mary lived in Alaska, SK, then Moose Jaw, SK and finally, Winnipeg, MB. Once back in Winnipeg, Mary was employed as a payroll clerk at Metropol Security from 1978 to 1991.
Mary was an earth angel who had a heart of gold. She was a devout Catholic woman who devoted her time to attending mass and volunteering at the church. She also gave to many charitable causes and in lieu of grandchildren, she sponsored several foster children. She volunteered at the Manitoba Theatre Centre as an usher for over two decades. She enjoyed vegetable gardening and preserving the bounty of her harvest.
She was infamous for her grape jelly which she picked from her backyard. She loved to watch her soap opera the Young and the Restless daily. She also was an avid sports fan of the Winnipeg Blue Bombers and Winnipeg Jets and she also loved to watch curling. Mary had the opportunity to do some travelling during her lifetime including Hollywood, CA, Nassau, Bahamas, Atlanta, GA, Vancouver, BC, London, ON and London, England.
Over the last decade of Mary's life, she suffered from a peripheral vascular disease that left her lower legs covered with open wounds. Special thanks to all the Home Care nurses including Nadine, Susan, Teresa, Jan and Marty who assisted Mary in her regular wound care. Thank you to Dr. Harding and Dr. Embil for their care over the years. Also, a heartfelt thank you to the palliative care nurses, especially Trish who assisted to make Mary's final weeks comfortable at home.
Due to provincial COVID restrictions, a small funeral with the close family will be held on June 1st. A memorial will be held in the fall with friends and family to allow for a special celebration of Mary's life. In lieu of flowers, donations in Mary's name can be made to CancerCare Manitoba Foundation, www.cancercare.mb.ca


On Tuesday, May 25, 2021, Mary passed away at her residence at the age of 92 years.
A longer obituary notice will follow.