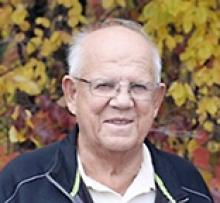 It is with heavy hearts our family announces that after a lengthy illness Richard Kolodie, husband, father, grandfather, brother, uncle and friend passed away, with family at his side every step of the way. He will be missed by many, especially his grandchildren.
He is survived by his wife Maureen, son Michael (Kristin) and their children, Spencer and Cameron, son Colin (Karen) and their children, Riley and Mackenzie; his brother Grant; and sisters; Marjorie Furber, Nancy Kolodie, and many nieces and nephews. He was predeceased by his daughter Erin Palamar (Mike Palamar), sister Gayl, brother Bud and sister in-law Mavis.
Richard was born in Winnipeg Beach, MB. He moved to Winnipeg in his late teens and took a job at Manitoba Hydro where he worked for 47 years. He married his wife Maureen in 1962. They had three children. Richard had many talents which he used while building a beautiful summer cottage in Ontario. He was quite the handyman and had a lot of patience helping his children and grandchildren through various projects. He always put family first and would never miss the grandchildren's sporting events. Sincere thanks to Dr. Brian Sharkey for so many reasons.
In keeping with Richard's wishes, cremation has taken place and due to current health restrictions a family gathering will be held at a later date.
In lieu of flowers, donations may be made in Richard's memory to his daughter's bursary: The Erin Palamar Bursary in Nursing at St. John's College, 92 Dysart Road, Winnipeg, MB R3T 2M5.