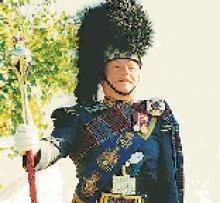 It is with deep sadness that we announce the peaceful passing of Cliff. He past away on May 13, 2021 at the age of 91.
He is survived by June, his wife of 60 years; his son Robert; daughter Cathy and son-in-law Robert. He was predeceased by his mother Norah and infant sister Gwendolyn.
Cliff was always a happy, fun loving man who loved a good party. He carried a lot of pride being a Drum Major of the many bands he performed with. He was always impressive and exceptionally well turned out in his uniforms. He was Drum Major of the RCAF, 402 Squadron Pipe Band, Winnipeg Police Pipe Band, Khartum Temple Shrine Pipe Band, Winnipeg Massed Pipes and Drum Band and in 2007 he was one of the Drum Majors in front of the 220 member Canadian Massed Bands in Scotland. Cliff was also a member of HMCS Chippewa, White Ensign League, Capital Lodge 136, Charleswood Legion No. 100, St. James Legion No 4 and active member of St. James Anglican Church.
Cliff was well known in the printing industry. He was also an exceptional golfer. In his younger days, he spent his summers at the Winnipeg Beach golf course with his grandmother. Cliff enjoyed feeding birds, barbeque picnics in the park and bonfires. He always had a smoky fire at his and June's trailer at Spruce Sands Trailer park. Another hobby he enjoyed was his tropical fish aquarium and outdoor goldfish pond. Many friends and family have fond memories of Cliff.
A private family interment has taken place with Rev. Pat Ferris officiate and Don Blaine piper.
The family would like to thank the staff on the 6th floor at the Misericordia Hospital for their exceptional care.
Donations can be made to their charity of choice or to the Winnipeg Humane Society.

Rest eternal grant unto him, O Lord, and let
light perpetual shine upon him. Amen.