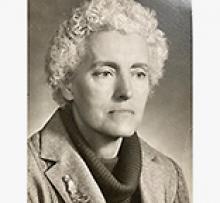 Teacher, mother and homemaker, Lee was born 17 years after Orville and Wilbur Wright flew the world's first airplane a modest 125 feet. She learned to drive on a black Model-T Ford. She volunteered for the Second World War which ended right after her training was finished. She raised her family during the most prosperous time in the history of the world and exited this life shortly after the fourth Martian landing.
It was a good run but not without heartache. Lee lost her husband when he was just 52 and she was predeceased by two of her three sons. Nevertheless, she persevered and refused, outwardly at least, to be bowed by these misfortunes.
Born in Manitoba to Scottish immigrant farmer John 'Jock' Brown and his wife Olga (McNab), a rural school teacher, Lee and her younger sister Jean, were raised on a farm in the rural community of Cartwright. At the age of 16, Lee started to teach on a permit at Mulvihill. After a year at Brandon Normal School, she taught at Coulter for two years, then for another year at Miami before enlisting in the women's Air Corps. She took her discharge at Vancouver and attended University of British Columbia where she met engineering student, Don Treilhard, her husband-to-be. After he graduated with a degree in metallurgy they moved to Flin Flon where he worked for Hudson Bay Mining and Smelting for a few years before they moved, young family in tow, to Northern Rhodesia and then Uganda. After a decade on the African continent, the family sailed back to Canada where Don took a position with Noranda Mines. In Quebec and a few years later he accepted another as an instructor at the Haileybury School of Mines in Ontario.
The peripatetic lifestyle was the one constant feature in their life and Lee became practiced in the art of moving and turning houses into homes as their addresses continued to change, much like the view from the window of a moving train: Copperhill, Tennessee, Montreal, Timmins, Ontario and Toronto.
When Don died, the children had by that time fledged, and Lee returned to Winnipeg, the one place in all the world that felt most like home and in the years that followed she dedicated her time and considerable energy to her friends and the betterment of her community. She was a social activist, campaigning for Cesar Chaves and the United Farm Workers labour union. Lee volunteered with the CNIB, the Manitoba Historical Society and was involved with Dalnavert House, Canada House and the Centennial Farm Program. For some 30 years or so, she delivered meals to the elderly and shut-ins in her community of East Kildonan.
Six years ago, Lee relocated to be with family in Port Credit and her view of Lake Ontario was a topography that most resembled her beloved prairies of Southern Manitoba.

Lee was loved and will be dearly missed.

Rememberances may be left on the
Skinner & Middlebrook Funeral Home
website obituary page.