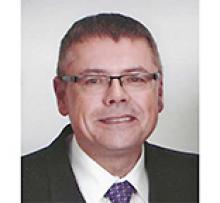 It is with great sadness, that we announce the sudden passing of our amazing husband, father, Papa, son, brother, uncle, and friend, Edward Stephen Blanchard on May 20, 2021.
Ed was born on August 6, 1960 in Winnipeg, Manitoba. He spent his childhood growing up in Windsor Park, making many memories with his mother Jean, father Roy, and sister Diane. He enjoyed his cars in his younger days. The most memorable being his 76 Camaro. He graduated from Pierre Radisson Collegiate and had to look for a job after graduation. He found that with Safeway.
Ed began his career at Safeway on May 27, 1977, where he started as a food clerk at 17 years old. He was almost not hired, as he mixed up his interview time, but in the end, he got the job. He went on to embark on his 43 year long career retiring as store manager on January 23, 2021. Ed was very involved in his work and made countless friends along the way. He helped organize many fun events in the Safeway Employee Associations such as memorable casino trips. holiday parties, BBQs, water slides, and go-karting to name a few. Creating memories that will never be forgotten. While at Safeway he met his wife Janice whom he fell deeply in love with. Marrying her on September 1, 1984, and was going to be celebrating 37 years of marriage this year. They went on to have three children, the eldest daughter Jessica and two sons, Justin and Kevin. Of course, we could not forget his four-legged son Max.
If you knew Ed, you knew how impactful this man was in all areas of his life. He would do anything for anyone without ever asking for anything in return. He loved to help whenever he had the chance. He was always cracking jokes and giving everyone funny nicknames to keep a smile on their face. Even if they were mostly 'dad' jokes.
Ed took great pride in his house, his yard, and his pool. Summer days would involve meticulously mowing the lawn, picking weeds, and cleaning the pool. Making sure everything looked perfect. While in wintertime, you would find Ed shoveling the snow even during a snowstorm to make sure there was always a clear path for everyone. When he wasn't taking care of his home in Winnipeg, he would spend his time at his condo in Las Vegas since 2013. He loved the heat, the events, and all the friends he made in Las Vegas. It was his home away from home. He was deeply saddened when he sold the condo in 2021, but was ready to begin his new adventure. He was planning to spend the summer camping in his trailer and had just finished setting up his new home away from home before his unexpected passing.
Ed took care of us all and that included taking care of his wife Janice after she was diagnosed with dementia in 2013. Ed would do it all, even with his new 24/7 job of watching over his wife Janice. He said he would look after her until the end. Now, he watches over her from above. We will miss him and everything he has done for us all. He will never be forgotten and his unbreakable commitment, his great storytelling and his funny sense of humour will carry on in everyone he has touched along the way.
He is survived by his wife Janice Blanchard, his father Roy Blanchard, his sister Diane Macneil and his three children, Jessica Denisiuk ( Mike ), Justin Blanchard (Marj), Kevin Blanchard and his grandchild Carter Denisiuk. He is predeceased by his mother Jean Blanchard.
The family would like to thank everyone who has reached out with support and in lieu of flowers, donations may be made in Ed's memory to the Alzheimer Society of Manitoba.