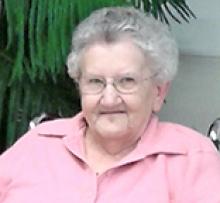 (nee MAGJAK)
It is with deep sadness that we announce the passing of our dearest mom/baba after a short battle with cancer. Baba passed away peacefully in her sleep at Holy Family Home on Saturday, May 22, 2021, at the age of 90.
Remaining to forever cherish her memory are her beloved children, Annette and Lynn Chartrand, Brenda and Terry Rheubottom, Greg and Christine; adored grandchildren , Theresa and Cam Basarab, Elizabeth Hands, Matthew Chartrand, and Dylan and Spencer King; and much loved great-grandsons, Evan and Ashton Basarab and Luke Hands, brothers, Ed and Michael Magjak (Brandon), Aunt Evelyn Levenick (Edmonton), cousins, nieces and nephews in Manitoba, Alberta and California.
Predeceased by her beloved husband Harry (April 2008), parents, Steve and Mary Magjak, sister Anne (at birth) and brothers George and Joe; in-laws Wasyl and Antonina Shelest, Pauline and Stephen (in infancy), Mike and Sophie, Peter and Ann, Paul and Jean, Nel and Dr. George Hardy, Mildred and Mike Garlinski. Baba was the last remaining first generation Shelest (by birth or marriage).
Born on December 23, 1930 in Brandon, MB mom moved to Winnipeg after meeting the love of her life, our dad Harry, at a family wedding in November 1949 and they married August 23, 1952.
Baba made the best perogies, holopchi and Sunday soup! Baba could, and would, talk to anyone who would engage in a conversation. In short time, she would learn all about the person and often times found some connection. She was very much a "people person". She was an original recycler, long before it became popular. If you needed something for a project it could usually be found at baba's house, be it buttons, boxes, ribbon, jars, etc.
After her mother was in failing health, baba took to the Greyhound Bus, travelling back and forth to Brandon on a regular basis for 40 years. She knew every ticket agent, baggage handler and bus driver by name and she often helped rookie drivers find their way to the bus depot in Brandon! Her final trip was in 2016 at the age of 86.
As her own health began to fail, she moved first to Thorvaldson Care Center in May 2017 and then to Holy Family Home in June 2019. Our family is thankful for, and blessed by, the exceptional care she received as a resident of St. Basil unit, especially the last two months. There really are angels on earth.
According to baba's wishes, cremation has taken place and a private family service will be held when possible.
In lieu of flowers please consider a donation in her memory to Holy Family Home, Jocelyn House, Winnipeg Humane Society or St. Nicholas Ukrainian Catholic Church.

Love you! Love you too!