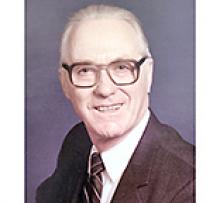 Peacefully, just three days prior to his 98th birthday, Robert Henry O'Neill went home to be with his Lord and Saviour, Jesus Christ.
Robert was born at his maternal grandmother's home in Stradbally, Co. Laois, Ireland, immigrating to Canada in 1927 with his parents, Robert and Agnes and brothers, George and Fred. They settled on a farm south of MacGregor, Manitoba. Bob attended MacAuley School where he often carried in wood for the stove and drinking water.
He served in the Second World War with the Queen's Own Cameron Highlanders, entered the theatre of war in France and was seriously wounded.
After returning from the war, he married Mary Louise Hillis on December 22, 1945. They farmed near Pratt, then moved to MacGregor in 1950 where Bob drove the Co-op fuel truck. He was active in the community; served on the Town Council, was a Boy Scout leader, refereed for the adult hockey team and was on-ice 'policeman' for the local skating rink.
In 1957, both Dad and Mom gave their hearts and lives to the Lord Jesus. They attended MacGregor Bethel Church where Dad taught Sunday school and was the Sunday School Superintendent for many years.
Dad soon felt the call to ministry. God placed in his heart a love for First Nations people and a passion for them to learn about His love. He began conducting services in homes on Long Plain and Sandy Bay Reserves and was invited to be guest speaker at many reserves throughout Manitoba and NW Ontario.
To better support his growing family, Dad took a meat cutting course at The Manitoba Institute of Technology (now Red River College). After graduating, he worked at Hardy and Buchanan at Stafford and Grosvenor. When the family moved to Winnipeg in 1966, Dad would work during the day and also follow his calling by travelling long distances to preach several nights a week.
After a time, Dad left his job to minister full time. He did missionary work in Haiti, was a pastor at MacGregor Bethel Church for seven years and continued to provide spiritual guidance to First Nations people. Dad officiated at many weddings, funerals and baby dedications and visited hospitals, jail and homes to bring prayer and hope.
And Dad could pray. He spent many hours reading his Bible and daily, with Mom, praying for all his family by name. He would pray for people on a roll that he kept and also for those who requested special prayer.
Dad had many interests and talents. Using his carpentry skills, he built the family home in MacGregor. He also tilled the soil for a large garden and tended his roses and daisies with care. His rendition of the hymn 'Sweet Hour of Prayer' on the harmonica could give you goose bumps.
In later years, Mom and Dad moved from Armstrong Avenue to River Ridge Retirement Home. After Mom passed away in 2017, Dad lived at Fred Douglas Lodge until his passing. The family would like to express their heartfelt thanks to all the nursing and health care assistants on Oak and Willow units who so tenderly cared for Dad. Thanks also to the nursing manager, Kerron, for her consideration of our family.
Robert was predeceased by his parents; his loving wife Mary; his siblings, George, Fred, Don, Ron, and Violet and son-in-law Alvin Friesen.
He leaves to mourn his passing those who will miss his presence – his children, Lil (Harold) Stewart, Henry (Diana) O'Neill, Shirley (Chris) Capper, Beverly O'Neill, Mary O'Neill and Barry (Carolyn) O'Neill; grandchildren, Shawn (Melony), Curtis (Rachel), Shannon (Rob), Ryan (Jennifer), Christie-Leigh, Ainsley (Graham) and Austin. He also leaves behind 13 great-grandchildren and numerous nieces and nephews.
Dad loved God wholeheartedly, loved his family unreservedly and provided an example of faith, love and commitment. 1 Corinthians 15:58
Given the current pandemic situation, a private interment will take place. A memorial service will be held at a later date.
Please contact Chapel Lawn between 9:00 a.m. to 4:00 p.m. to receive the link for the live streamed recorded funeral service.