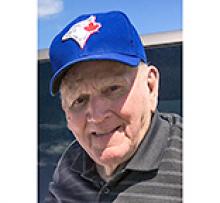 It is with great sadness the family of Lorne Rintoul announce his sudden passing on May 21, 2021 at the age of 96. He will be
remembered as a loving husband, father, grandfather and great-grandfather.
Lorne was born April 11, 1925 in Portage La Prairie, Manitoba. He and his eight brothers and three sisters grew up in the Bagot area where he worked on the family farm. He
married Colleen Locke September 25, 1948 and raised two children, daughter Terry and son Lorne. Lorne will always be known for his ability to deal with mechanical challenges. He had a motto that "anything that breaks can be fixed" and would work for hours in his
famously messy garage to understand what made things work or why they didn't. He
enjoyed working with wood, crafting furniture and pieces for family and friends. He was a big sports fan - he played and coached baseball and remained an avid golfer well into his 80's. Lorne had many fond memories of adventures with his golfing buddies in Texas and Emerson and especially his four holes in one.
Lorne is predeceased by his parents, Jack and Lorna, five brothers, Glen, Tom, Bruce, Melvin, Eldon and two sisters, Phyllis and Maxine.
He is survived by his wife Colleen; his two children, Terry (Ken) and Lorne (Jan); four grandchildren, Brie, Travis, Stefanie and Zach; four great-grandchildren, Abigail, Charlotte, Jacey and Rylan; his sister Vivian (Harley); brothers, Wayne (Betty), Danny (Louise) and Ken (Pat); sisters-in-law,
Georgina and Edna, brothers-in-law, Helmut Schroeder and Cliff Locke, and many nieces and nephews. He will be forever remembered and greatly missed by his family and the many lifelong friends he and Colleen made during their 72 plus years together.
The family would like to extend thanks to the nursing and health care staff at the
Heritage Life Personal Care Home in Niverville for care provided to Lorne over the past 18 months.
An interment will take place at a later date.