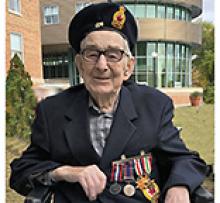 Edgar (Ed) Clairmont passed away at the age of 96 years at Deer Lodge Centre on May 23, 2021.
He was predeceased by his parents, Delia and Samuel; wife Evelyn; and two siblings, Rose and Albert. He is survived by his daughter Amanda, son Bruce and numerous nieces and nephews.
He was born March 1, 1925 at the family home on Royce Avenue in Winnipeg. He enlisted in the Canadian Armed Forces in 1943. He was trained in England and joined the Royal Canadian Horse Artillery, First Regiment as a radio man in Italy in the late summer of 1944. In the winter of 1943 to 1944, his regiment moved through France and Belgium to join the battle for the liberation of the Netherlands. He saw intense fighting in Italy and the Netherlands, but seldom spoke of it. After the war was over, he served in the Army of Occupation, returning home in 1946.
He settled into civilian life, working for Raber Glove (Utility Glove Company) until his retirement in 1992. It was there that he met Evelyn, marrying in April 1948.
He enjoyed carpentry, cards, particularly cribbage and rummy, and spending time with family. There were many trips to visit family in Canada and the USA. He enjoyed gardening and spending time at his brother-in-law's farm. He loved animals, especially dogs, and could gain the trust of the most skittish of animals.
In January 2013 he moved to Deer Lodge Centre. His kind and caring nature made him many friends among the staff and residents of Deer Lodge Centre, where he will be sorely missed.
Edgar had a long journey with cancer and greatly appreciated the wonderful care provided by CancerCare Manitoba.
The family wishes to thank the staff of Deer Lodge for the remarkable care and kindness shown to Edgar, making his last years happy ones.
Donations in Edgar's memory may be made to the Deer Lodge Foundation or CancerCare Manitoba Foundation.
A memorial service is planned for a later date.
Make a donation to