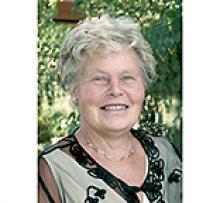 It is with great sadness that we announce the passing of our beloved mother, Margita Sudermann, in her 88th year of life. Margita died peacefully of heart failure on Sunday evening, at St. Boniface Hospital with family members by her side.
Margita was predeceased by her loving husband, Henry Sudermann, in 2016, as well as by her parents, Maria (Loepp) Loewen and Peter Loewen, and her younger brother Victor Loewen and his wife Lily Loewen. Margita was also predeceased by three of her husband's siblings and their spouses, Luise Dyck (John), Helene Paetkau (Jake), and Margarete Toews (Harry).
Margita leaves behind to mourn her four children and their spouses, Marlies (Maria Louise) Sudermann (Chris Newton), Paul Sudermann, Betty Margarete Neufeld (Werner Neufeld) and Theresa Anne Sudermann; three grandchildren, Jason Neufeld (Brianna), Nicole McMullen (Cody), and Alina Newton (Lindsay Waterman); five great-grandchildren, Drew, Blake and Hunter Neufeld, and Ellie and Chase McMullen. Margita also leaves behind many relatives and friends in the Winnipeg, Ontario, Saskatchewan and Germany.
Margita was born in Halbstadt (Moloschansk) Ukraine in 1932. After surviving the Holodomor famine, Soviet persecution of Mennonites, and the ravages of the Eastern front of the Second World War in Ukraine, Margita, her mother and brother ended up as refugees in the Bielefeld area of northern Germany in 1944. Margita's mother decided to move the family to Canada, sponsored by her Willms relatives in Winnipeg.
Margita always loved school and did very well in several languages, but refused to start school over again in a new language in Winnipeg. At age 16 she got a job in a factory and helped her mother buy a house. In Winnipeg, Margita soon met Henry Sudermann, who was a fellow refugee, night school English student and member of First Mennonite Church. After her marriage to Henry on August 1, 1951, Margita left paid work and raised their four children.
Margita also supported Henry in starting Simcoe Motors with Harry Toews. They had success in business, and began to enjoy life more, and with a wide group of friends with whom they travelled widely, camped, and cottaged at West Hawk Lake, together with their growing family.
Mom enjoyed volunteering at Bethania Personal Care Home in the German reading and singing programmes, and also spent much time caring for elder relatives in the family. Margita remained "fiercely independent" to the end. She was unique and will be much missed.
We wish to thank all the home care and medical staff who assisted Mom in the past 15 months when her health failed, as well as her supportive network at Bethania Haus.
In lieu of flowers, memorial donations to the Bethania Haus gardening and birthday program, or a charity of choice.
There will be visitation on Thursday, June 3, 2021, between 6:45 p.m. and 8:00 p.m., call Friends Funeral Service at 204-339-5555 to book an appointment. A graveside service and interment at Brookside Cemetery will follow for immediate family on the morning of Friday, June 4, 2021.

This obituary may also be viewed at
www.friendsfs.ca