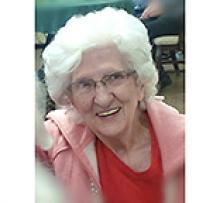 It is with sad hearts we share the peaceful passing of Wilma Bonnis on May 28, 2021.
Although Wilma was not born a Jamieson, she became one when the Jamieson family embraced her into our "marvelous madness." Wilma is survived by her found family - her closest friend, sister, and partner in crime, Marjorie Jamieson; brothers, Keith Jamieson and George Jamieson; nieces, Kelly Thomson (née Jamieson), Patty Jamieson-Bell, and Rebecca Jamieson; nephews, Peter Jamieson, Luke Jamieson, and Toby Jamieson; and great-nieces and nephews, Devin Stuart, Serena Stuart, Courtney Thomson, Max Thomson, Felix Jamieson, Jasper Jamieson, and Clementine Jamieson.
She is predeceased by her parents, William and Grace Bonnis; her "other mom" Lena Jamieson, and brother Grant Jamieson.
Wilma was born January 9, 1930 in Moose Jaw, Saskatchewan. She also lived in Brandon but spent most of her life in Winnipeg. She worked at various jobs including telephone operator and stenographer, but the majority of her career was at Kimberly Clark Ltd. where she worked her way up to executive assistant. She retired in 1993.
Wilma and Marj met while working at Pioneer Electric. When they were both laid off on the same day, they decided that Wilma should move in with Marj and her mother. Wilma and Marj lived together for the rest of Wilma's life, including at Poseidon Care Centre. They were the first single women in Winnipeg to qualify for a mortgage to purchase their own home. As a modern, independent woman, Wilma set an example in a time when women were beginning the battle for equality.
Wilma loved reading and - fortuitously -"hoovering" and cleaning. She also enjoyed renovating and taking care of their home and their dogs. There was always at least one dog -usually more than one! - in their home. She also loved music.
Wilma left the following for us to publish in her obituary:

"My beloved heirs will put this in the papers on my behalf. It is different from most as I want to take this final opportunity to thank all my families and those dear ones who befriended me during my lifetime.
It's been a wonderful life. I tried my best and I have been grateful for it always.
In Lena's home I found yet another mother and, at last, a sister and brothers! A new family who took me into their hearts and made me their own.
To my dear families (the Bonnises, Jamiesons, Thomsons AND Stuarts), thank you from my heart for your constant love and caring. You warmed my heart and, though I was never known for tact, you were all generous enough to understand when my words came out wrong, that I loved you all dearly and didn't mean them as they sounded.
Thank you, thank you, thank you!
Also thank you good friends and neighbours. You know who you are. I enjoyed knowing you and being in your company.
May God bless and keep you all until we meet again.
At my request, cremation has taken place."

We would like to thank everyone at Poseidon Care Centre who cared for Wilma in her last years. Despite her illness, she maintained a cheerful outlook and delighted folks at Poseidon with her singing. Even when Wilma didn't know who we were, she knew she loved us.
Due to COVID, a small family service will take place, where we will raise a glass of Jameson in a toast to Wilma.
Donations can be made to the Alzheimer Society of Canada to honour Wilma.