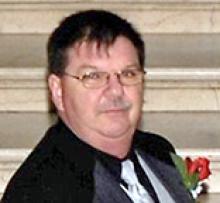 Peacefully, on May 29, 2021, in the arms of his wife, Raymond (Ray) Remillard passed away at the age of 70.
He was predeceased by his father Joseph Remillard, stepmother Madeline Remillard and brother Guy Remillard.
Left to cherish his memory is his wife Joanne; mother Yvonne; sister Diane (Larry); brothers, Richard (Pam), Claude (Suzanne), Dennis (Anna), Gerald (Sandy); sons, Pierre, Raymond Junior, Adam; daughters, Tonya, Kimberly, Trisha, Danielle, Roberta and Jordan; as well as many extended family members and friends.
Ray grew up in St. Joseph, Manitoba on the family farm. Ray and Joanne married in 1995 and lived in Winnipeg until 2009 when they retired to the family cottage in Hnausa, MB. Ray worked in the Seven Oaks School Division as a custodian for 18 years in many of the schools. Some of his hobbies included fishing with the grandchildren, raising dogs, target shooting, coffee with the boys at the Chicken Chef in Arborg, and sharing his faith with everyone he came into contact with. Ray brought a smile to everyone's face as he loved to joke and was a great storyteller. He will be fondly remembered for his "best" and most used joke "bring me a winning lotto ticket".
In accordance with his wishes, cremation has taken place with a "Celebration of Life" at his home church, Freedom Worship Centre, in Arborg, Manitoba at a later date, once COVID restrictions have eased.