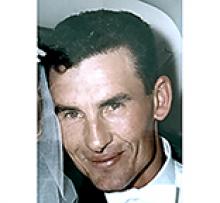 It is with heartfelt sadness that we announce the passing of a beloved husband, father and Gido, Robert, at the age of 84.
Robert is survived by his loving wife of 56 years, Marlene, along with their children: Russell (Lorraine) Knibbs, Doris Ann (Glenn) Hildebrand, Dawn (Sean) Krahn, Robert (Erin) Wuskynyk, Michael (Sarah) Wuskynyk. Our beloved grandchildren: Jack and Amy Hildebrand, Gillian and Lydia Krahn, Emily and Olivia and their mother Courtney Wuskynyk, Michaela and William Wuskynyk, also his dog and buddy, Sheba. He is also survived by his two sisters: Bernice Zgliczynski, Ollie (Joe) Kohut and many nieces and nephews.
Robert (Bob) was predeceased by his parents, Peter and Anne Wuskynyk, sister Emilia Shindak, brothers, Lawrence, Michael and sister-in-law Jennie Wuskynyk and Bob's beloved police dog Roscoe whom he had cremated.
Bob worked hard all of his life as a farmer and also was proud to be a school bus driver and his Class 2 license. He loved the outdoors, and especially hunting and snowmobiling.
Bob was an active member of St. Michael's Ukrainian Catholic Church at Red Rose, MB. Bob served every priest at the church during services all his life, following in his father's footsteps. He was the main maintenance person at the church. Bob was heartbroken when the church was demolished.
Bob was also named Honorary Fire Guardian for many years by the Department of Conservation. Bob was always there to help the Department of Highways when any of their equipment broke down and snow plow his neighbour's roads at no charge. Bob was always ready to help his community whenever he could. Bob was an amazing self educated mechanic and would look after his vehicles and help others whenever he could. His sons often phoned him for his wise advice on what "could" be wrong if their own vehicles weren't working right.
Bob also brought many orphaned bear cubs home to the delight of his children. He loved all animals and brought many baby calves born in cold weather into the house to warm them up and be nursed by his happy children.
Whenever we got a chance to travel, which being a farmer was rare, Bob was so happy. Bob was wonderful to travel with as we always had fun and enjoyed everything along the way to our destination.
Bob was so proud of all of his children and each of their achievements. He loved his children and grandchildren with all his heart. Bob called Marlene his sweetheart and when he arrived at Fisher Branch Care Home six days before he passed he saw his wife and said, "My Sweetheart".
Our thanks to Dr. Kristin Heinrichs, our family doctor through the years and to Dr. J. Donnelley, Dr. Mann, Bobbi Thompson, Tammy Jonasson, Jennifer Spencer and all the amazing staff at Arborg Hospital and Fisher Branch Personal Care Home.
God saw there was no cure for Bob's illness and whispered "Come to Me".
Bob's dream was to "walk again". In that enlightenment, in lieu of flowers donations can be made in Robert Wuskynyk's name to: Manitoba Possible, 1857 Notre Dame Ave., Winnipeg, Manitoba R3E 3E7.
As per Robert's wishes cremation has taken place. Due to covid there will be no service. A private family celebration of life will take place at a later date.
Rest in Peace my love. We will always love you. Your wife and children.