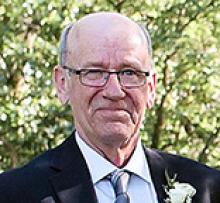 With sadness, our family announces the peaceful passing of Donald Charles Cook, while surrounded by his family.
Donald will be dearly missed by his wife of 40 years, Ardith, sons, Steven and Phil (Erin), grandson Andy, daughter Elyse (Richard), mother Eleanor, brothers, Rodney (Sheila), Kevin (Sandra), Garth (Tricia), and sisters, Karen (Greg) and Heather, in-laws, Ian, Kim, Brent and Bev Reid, as well as many aunts, uncles, cousins, nieces, nephews, great-nieces, great-nephews and friends. He is reunited with his father, Ken, and so many family and friends.
For Donald, there was nothing better than growing up in Dugald, where his family and friends were always around. He enjoyed summers on the farm, acquiring the driving skills he used for many road trips in his Corvette and Cougar. After graduating from Springfield Collegiate in 1973, Donald completed the Civil Engineering Technology program at Red River College in 1975. His career took him across Manitoba working with PFRA, Ken Cook Ltd., NFCRA, Footprint Engineering (NCN), and Strilkiwski Contracting Ltd. Donald was well-respected by his colleagues, many of whom became good friends.
Donald and Ardith were married on May 30, 1981, and shortly after moved to Oakbank (gasp!) to raise their family. Donald had many lifelong interests that he shared with his kids - curling, the Jets and Bombers, travel, photography, reading and crossword puzzles. He had an incredible memory and everyone wanted him on their Trivial Pursuit team.
Donald racked up a lot of kilometers on the road - whether up north for work, or to small-town Manitoba for tournaments and bonspiels, he always had the vehicle warmed up and ready to go. His favourite trips included Miami, Acapulco, Grey Cups in Toronto and Montreal, Hawaii, the Caribbean, California, Florida, Ottawa, Arkansas, and Arizona to visit Ken and Eleanor.
Although he didn't get to enjoy a long retirement at home, he made sure the coffee was on every morning and that Coronation Street was always recorded for Ardith. He will be lovingly remembered.
There will be a virtual Celebration of Life on Tuesday, June 8 at 7:00 p.m. at www.seasonsfunerals.com. If friends so desire, a donation in Donald's memory to CancerCare Manitoba would be appreciated.
Family and friends are invited to share memories and leave condolences by visiting Donald's memorial page at seasonsfunerals.ca Make a donation to