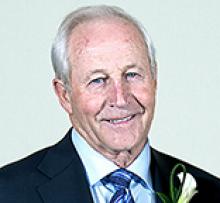 Walter Michael Copp, 79, of Winnipeg, Manitoba passed away peacefully at home on Tuesday, June 1, 2021, surrounded by his family.
He was predeceased by his parents, Stella and Stanley Copp, sister Patricia Gagné and brothers-in-law, Tony Gagné and Terry Kuzina. He is survived by his loving wife of 56 years, Joyce Copp (nee Sitarz), children, Carolyn (Darren) Whyte, Catherine Copp, Christine (Chad) Dockter and Justin (Sandra) Copp, grandchildren, Ryan, Brittany and Derek Whyte, Paige (Braydan Grawberger) and Taylor Krasulja, Anabel, Charles and Molly Copp, and great-granddaughter Peyton Grawberger, as well as his siblings, Stanley (Marcella) Copp, Grant Copp and Debbie Kuzina (Patrick), and in-laws, Louise and Gayle Venton, along with many nieces and nephews.
Walter was born April 16, 1942 in Winnipeg. He attended McIvor, New Rosewell and St. Paul's High Schools. Growing up, his family worked as market gardeners, peddling potatoes and other vegetables at the North End Farmers' Market and making barrels and barrels of dill pickles. The entrepreneurial spirit was in his blood. At age 19 he became an owner-operator hauling gravel for Kleysen's Cartage. In the early 1970s, Dad took a leap of faith and started Brunswick Enterprises along with his family, eventually quitting his job at Air Canada where he worked from 1967 to 1975. Brunswick began as a demolition company and over the years evolved into Brunswick Steel where he worked until his retirement. He instilled in us the values of hard work and determination.
Throughout the years Dad enjoyed many fishing trips with friends and family. He was a season ticket holder of the Blue Bombers for over 40 years and an avid Jets fan. He appreciated arts and culture including the WSO, MTC, Prairie Theatre, Folk Fest and Broadway musicals. He was hip, suave and always well dressed but was happiest flipping his homemade burgers in the backyard. He truly was a family man. Dad's travels took him to six continents. Highlights included Dakar, Senegal, the Milford Track in New Zealand and the Great Wall of China. He had fond memories of family times at Riding Mountain, Disney World and Puerto Vallarta. Dad had a love of the outdoors, biking, hiking, and cross-country skiing. When he learned to downhill ski in his 50s he was a natural!
Dad met Mom in grade 4 and liked her right away. They were married in 1964, started their family on McIvor Avenue and then resided for 45 years on Bluegrass Road. Dad loved his yard work, checking his rain gauge and watching his grass grow but recently welcomed the simpler life at his new condo on Henderson Highway. His grandchildren and great-granddaughter were the light of his life.
Special thanks to Dr. Jeff Wiebe and the WRHA Palliative Care Team for their outstanding care and compassion.
Cremation has taken place and Funeral Mass will be held at St. Gerard Parish followed by interment at Bird's Hill Park Cemetery at a later date. An announcement will be published with the date and time of the service for those that wish to join the family virtually.
Donations in Walter's memory can be made to Harvest Manitoba, Siloam Mission or a charity of your choice.
Friends and family are welcome to leave condolences and share memories by visiting Walter's memorial page at seasonsfunerals.ca