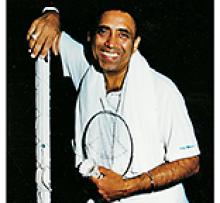 On May 27, 2021, Pal Chawla -- husband, father, brother, uncle, cousin, dear friend, and badminton legend -- passed away peacefully at the age of 79.
Pal was predeceased by his parents, Bhagwan Singh and Sheila Chawla. Born in Amritsar, India, Pal was the eldest of three children. He is survived by his wife Surinder (nee Grover) and loving daughters, Ami and Puneet (Bryan); sister Manjit Bajaj (Jag) and their children, Seema Bell (Steve) and Jaspal; brother Archie Chawla (Pat) and their children, Sean and Tara; as well as his first cousins, Satinder, Devi, Pinky, Bubli and their spouses and children.
Pal was an incredibly active young man right from the get-go and enjoyed many sports. He began his meteoric rise in badminton at the age of 13 after being fully engrossed in cricket. By the age of 19, he represented India in the Asian Championships and was part of the Gold Medal Winning Team. He once stretched the World's #1 Player (Erland Kops) to a grueling three-game match. Pal was the Manitoba Champion in singles, doubles (Archie) and mixed (Joy Knudsen) - many times over. He also won a Silver Medal in men's singles at the 1971 Canada Winter Games.
With the help of his uncle, Daman Chawla, Pal came to Canada in 1967 to begin his record-setting tenure as a Professional Badminton Coach. Pal was a complete badminton player. Not only with power and fitness but also consistency and patience - qualities that for anyone who had the privilege of knowing Pal, know they ring true to his character as well. His journey started in Winnipeg, MB working at the Wildewood Club from 1967 to 1970. Pal then spent one successful year at the Wascana Winter Club in Regina, SK. While there, Pal received an offer he could not refuse; to take over from his uncle Daman at the Winnipeg Winter Club (WWC), continuing the Chawla Legacy. Pal worked at the WWC for 40 years from 1971 until his retirement in 2011. Pal is still known to be the longest serving Badminton Pro in North American history (44 years). In addition to producing several National, International and Olympic badminton players, Pal was recognized for his coaching history and inducted into the Badminton Canada Hall of Fame in 2016.
Badminton provided Pal with innumerable lifelong friendships. He truly experienced an inordinate amount of joy from mentoring so many, near and far.
Pal married Surinder in 1975 in Amritsar, India and they welcomed two beautiful daughters, Ami and Puneet. Despite working nearly 12-hour days, six to seven days a week, and running tournaments every other weekend, Pal never complained. A common mantra of his was, "Just go with the flow." He enjoyed golfing in his downtime, and always maintained a very close relationship with his family. He provided them with a comfortable life, filled with travel and joy. He also earnestly kept in touch with his extended family and friends no matter where they were and particularly enjoyed a reunion spent in Koh Samui, Thailand. Pal always made time for everyone in his life, even if it made him a little sleepy sometimes - "not tired!" He impacted so many families', friends' and students' lives, both on and off the court. He also found the time to be incredibly social, enjoying "music group" and "card games" on the weekends with Surinder and their close friends. Pal knew the best food in any given city - especially if it was vegetarian and Indian. He lived for inspirational quotes and loved sharing his "Dad-jokes" as often as you'd let him. Pal was a true Winnipegger through and through, endlessly supporting the Blue Bombers and Jets; often sharing this time with his daughter, Puneet.
Pal dedicated much of his life to cultivating his strong will and finding his gentle, kind, and compassionate nature with daily meditation practice through the Science of Spirituality. He developed an intimate relationship with God (Naam) which was truly a source of peace and bliss for his Soul, which is now with Naam and resting in Eternal Light.
The Egyptians used to ask two questions when they spoke of someone passing - did they find joy? and, did they bring joy to others? Pal did both. Even though his physical form has moved on, Pal will continue to live on in our shared memories forever. He will be dearly missed but never forgotten.
Many thanks and our deepest gratitude to the staff on the 4th Floor Geriatric Rehab Unit of Victoria General Hospital - Dr. Kevin Coates, Tanya (Physicians Assistant), Cody (Physio), Melody (OT), Gertrude (Nurse), Mary Anne (Nurse), Rakesh (Nurse), and numerous Health Care Aides. Especially at this difficult time during COVID, you took care of Pal like he was one of your own. Our family sincerely appreciates the excellent care you provided and for allowing us to be with him in his final days.
A private family service and cremation has been held. A public Celebration of life will be held at a later date as public health restrictions allow. Updates on services will be found on Pal Chawla's tribute wall at www.bardal.ca.
In lieu of flowers, donations can be made in the Chawla Family's name to the Canadian Cancer Society.