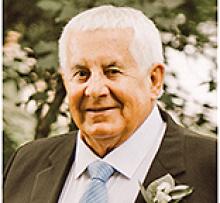 Peacefully on June 9, 2021, after a courageous battle with prostate cancer, our beloved husband, dad and grandpa passed away at the Gimli Community Health Centre. His devoted wife, Jennie, of nearly 59 years, was by his side to the end.
Joe was born in Meleb on February 4, 1940 to Ludwig and Olga (Trakalo). Life on the farm was always full of adventure, imagination, and perhaps a little mischief. He attended Normal School (Teachers' College) to become a teacher at a young age. He met the love of his life at a wedding at Farmers Community Hall on August 13, 1960, becoming engaged on August 12, 1961.
As a truly devoted teacher for 37 years, his career took him from Cumming School to Finns, Steep Rock, Vidir, and finally Gimli which became the family home. He worked hard to earn two university degrees through evening and summer school studies, all while teaching full time, having an additional part-time job, and raising a family. He was a member of St. Michael's Catholic Church and the Knights of Columbus. After retiring from teaching, Joe continued to work as manager of Fisher Repair in Gimli. Dad was a family man through and through. There wasn't anything he wouldn't do for his children and grandchildren. He found the greatest joy in having as many of us over for a meal as he could. "Maybe we could get together and take some steaks out of the freezer?" were some of his favourite words. He enjoyed spending time with his grandchildren, taking them on numerous outings and celebrating their many accomplishments. He was truly their greatest encourager.
Joe enjoyed hunting with Tony and Bob, and fishing with Don. He kept busy with his hands and was always eager to fix anything broken. He loved restoring old vehicles, with his Toyota Land Cruiser being his pride and joy. It was driven in the Icelandic Festival parade for several years, and caught the attention of many, even an eventual buyer from Alaska. Dad was passionate about his garden, flowers, and Christmas lights. Dad and Mom spent many winters in South Padre Island and Weslaco, Texas, meeting new friends along the way, especially Mel and Lil.
He is survived by his wife Jennie and children, Debbie Dickson (Mark), Connie Townsend (Reid) and Brad (Belinda). He will be lovingly remembered by his grandchildren, Jennica (Ethan), Ashleigh (Griffin), Kayley, Katrina (Chris), Gianna, Brendan and Kendall, and step-grandson Ben (Josée, Bauer and Boden). He will also be dearly missed by his siblings, Tony (Irene), Walter, Diane (Don), Julia (Bob) and Virginia, in-laws, Wally, Mary, Peter and Mary, as well as many nieces and nephews. We cannot forget to mention his long-time friends, Ed (deceased), Audrey, Don, Diane, Joe and Alice. He was predeceased by his parents, in-laws, Fred and Annie Samorodny, sister and brother-in-law Eleanor and Ernie, and sister-in-law Elaine.
Cremation has taken place with a private service to follow.
In lieu of flowers, donations can be made to St. Michael's Church parking lot fund (Box 266, Gimli), CancerCare Manitoba, or Heart and Stroke Manitoba.


Peacefully, with his wife by his side, on June 9, 2021, at the Gimli Community Health Centre, Joe Sorokowski, aged 81 years, of Gimli, MB passed away.
Cremation has taken place and a private service will be held at a later date.