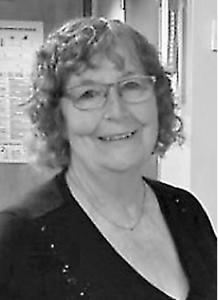 DYCK: Kerrie Jean Dyck (nee Creaser) of Newdale, MB suddenly passed away at her home on May 3, 2021 at the age of 63 years. Kerrie was raised on a farm in Rapid City, MB. She did her schooling at Tremaine School, Rapid City, Elton Collegiate and Crocus Plains Regional High School. Kerrie met her husband, Larry while still in high school. The two were married August 30, 1975 and just celebrated their 45th wedding anniversary. After they were married, the couple moved to the Sandy Lake area and resided there until 1979 when they moved to their current acreage near Newdale. In 1977, Larry and Kerrie became parents to their only child, Shawna. Kerrie was competitive in sports, but especially loved playing softball. In the late 70's, she played ball with the Trifon's Pizza Ladies Fastball team in Brandon, and was known as the clean up batter. In 1980 the team went on to provincials in Thompson. When she quit playing ball in Brandon, she went on to play/coach the Sandy Lake Comettes team. Larry introduced Kerrie to the trucking industry when the couple got married. Kerrie very proudly got her class 1 licence in 1981. In the mid 80's Kerrie started working at Canada Post and continued her education taking computer classes at ACC. However she would return to the road in the early 90's, running double-team with Larry. When the duo quit long haul trucking, and she was home full time she became a Municipal Councillor for one-4 year term. She then returned to Canada Post as Postmaster for 1 year. Although she gave up the postmaster position she stayed on part-time until her passing. She has been employed by Elections Canada working in the Minnedosa office for many years as well as Census Canada. She volunteered for the Minnedosa & District Health Foundation, and would help out with the thrashing days in Austin and the yearly event put on by the Old Iron Club in Strathclair. She would always help out friends with driving for appointments or making food to take to them in times of sorrow. Kerrie was an excellent cook and always looking for ways to improve. She loved to bake in her spare time. She could never go empty handed when going to a friend's place and always had to take the host's favorite dish. Kerrie loved to travel and camp. She had many fond memories of touring the East Coast of Canada as well as the West Coast, England, Holland, Scotland, Churchill, Alaska by motorhome, Christmases in Texas, as well as 8 cruises. She loved spending time at their seasonal camp site in Sandy Lake. Kerrie was predeceased by her mother, Doris, and her brothers Ray, Kelly, and Andy. She is survived by her father, Ken; husband, Larry; daughter Shawna; son-in-law Jeff; grandchildren Samantha, Blaze and Chace; as well as numerous nieces and nephews. White's Funeral Home, Minnedosa, in care of arrangements