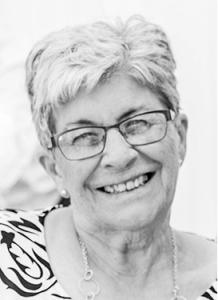 ROWE: Patricia Anne. As the one year anniversary approaches we remember the life of Patricia Anne Rowe (Busby), passed away at the Souris Regional Health Centre on June 15, 2020, at the age of 79 years. Pat was born on August 24, 1941 in Halifax, NS. She was the eldest child to Clem and Jean Busby followed by her three siblings, Donna, Dan and Susan. As a child Pat, her parents and siblings moved from Roblin, Manitoba and settled in Waskada, Manitoba. It is here that Pat met Brian Rowe. Pat and Brian married on April 2, 1960, and were able to celebrate 60 years of marriage together. Following their marriage, Pat and Brian moved to Winnipeg so Brian could complete his mechanics training course. In 1961, Pat and Brian moved to Grand Rapids. Pat travelled home to Waskada to have their two eldest sons Don and Jeff. In 1964, Pat and Brian purchased farmland south east of Melita. It is here that Pat and Brian welcomed three more children to their family, Carla, Joanne and Tyler. Pat settled in to the busy life of being a farm wife and mother of five. There are many stories of the children coming home from school to homemade bread and doughnuts. In her later years, it was always asked of Pat to bring homemade bread or buns to any family get together. It was very evident that Pat had a creative knack for decorating. She was able to turn her families' simple farmhouse into a cozy home for her and her family. In the fall of 1979, Pat and Brian sold the farm and moved their family to Souris where Brian had purchased West End Service Station. While getting settled in Souris, Pat was able to put her creative talents to use once again working for Corrine Carlisle at the town's local flower shop. Pat loved her flowers, especially anything in the colour red. Pat eventually moved on and took a position working in the kitchen at the Souris Hospital. Pat continued on at the hospital while Brian began working on the pipeline. Pat would travel to Saskatchewan to visit Brian as often as she could. After retiring, Pat made the decision to pack up her sewing machine and travel with Brian while he worked on the pipeline. The only real travelling Pat and Brian did was during this time, which allowed them to see lots of country while travelling from east coast to west coast in their travel trailer. During this time Pat made many friendships, many of whom she kept in contact with over the years. Once Brian retired from the pipeline, they returned to their home in Souris. Brian once again purchased a mechanics shop in town while Pat became a strong presence in the community. Pat was rarely to be found at home. There were many day trips with friends out for lunch or to the quilting stores that she loved. It was well known to her family that Pat was not available on Mondays, Wednesdays or Fridays as she would be on a coffee date with one or all of the friends she had come to cherish. Pat had many close friendships, some of which belonged to her beloved "coffee group" that met every Monday for 40 years. Another of Pat's great loves and talents was her quilting. She hosted the quilting group "Bits and Pieces" once a month at her home. Quilting was very important to Pat and her family remembers coming over many times to quilts in progress spread all over the house. Pat loved her yard and house and enjoyed keeping everything current with today's trends. On the rare occasions you did find Pat at home the TV would always be on, Cityline or Marilyn Dennis to give her the inspiration she needed to keep up with these trends. Pat was a very generous, caring and talented woman. It didn't matter if Pat knew you for five minutes or 50 years she always made you feel important and that you held a special part in her life. Pat always had an open door and open arm policy. She loved having her kids, grandkids or friends pop in for a visit and you were always met with a hug. Pat was an amazing lady who leaves behind her husband of 60 years Brian, her five children, Don, Jeff, Carla (Sheldon Betker), Joanne (Ed Phillips), and Tyler (Lindsay Vanhove), her grandchildren, Justin (Ashton), Amy (Dan), Lena, Kyle (Drew), Brett (Kendall), Jodi, Kadjun, Pheonix and Jace. Her sister Donna (Don Jackson), brother Dan (Carol) Busby, and sister Susan Mulholland, nieces, nephews, in-laws and many, many friends.