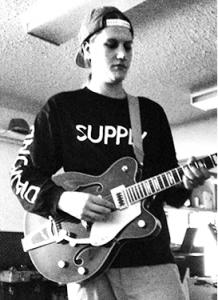 
PENNER: Landon Craig. June 10, 1990 - May 26, 2021. Peacefully, at his home in Vancouver, holding his precious guitar, Landon left his earthly body to go to heaven to reunite with his Grampa Lloyd Craig. Landon recently moved to Vancouver to pursue his music business, he recently launched Beats by Razkil and had many projects on the go. Landon was born in Brandon and raised on the family farm north of Douglas with his dad Kelly, mom MaryAnn and sisters Stephanie and Kendra. He was an active boy, enjoying baseball, hockey, skate-boarding, golf, snowboarding and skidooing. He spent many hours in the summer swimming, dirt biking, quadding and using the half pipe in the front driveway. Landon's love of music started very young and escalated after his Gramma (Susan Craig) purchased his first acoustic guitar. It was a passion of his and he began teaching guitar lessons at the age of 15 at Surridges in Brandon. Along the way Landon was a part of many bands, from starting in the basement at home with a full rock band, renting the Douglas Hall to put on their own show (of course mom would have to drive the band), to playing many gigs including Barnes Burner and Battle of the Bands at the Brandon Fair. He spent many of his Brandon years living and creating music at Enclave with dear friends who had many good influences on him. Landon's family and friends were so very important to him. He always made time for them and made sure he connected with them time and again. Landon lived the most recent years with his Gramma, they may have drove each other crazy but they were always there for each other, making sure the other was behaving and their door was always open to those in need. Landon lived a very "larger than life" life. He played hard and loved harder. He was so proud of his little sisters and teased them to no end, but each having a special place in his heart. When you met him, you were a friend no matter your background. Landon will be in our hearts forever and he knew how very proud of him we are. We are so grateful we have hours of family videos of him all through his years and so many of his performances, jam sessions and just sitting around a fire or living room playing guitar and singing. Landon is survived by his parents, Kelly and MaryAnn of Oakbank; sister Stephanie and brother-in-law John Baron of Winnipeg; sister Kendra and her partner Taylor Cross of Oakbank; Gramma Susan Craig of Brandon; grandparents Dave and Jessie Penner of Brandon; aunts and uncles: Larry and Jennifer Penner, Rick and Nancy Penner, Wendy Penner, Dave and Theresa Penner, Lorne and Susan Craig, Dawn and Ryan Mawer, Karen Huska and Bob Huska; cousins Amanda and Jeff and their children, Tim and Heidi and their children, McKenna, Ryleigh, Ashton, Jack, Gillian and Andrew. He also leaves to mourn his many, many friends, colleagues and musician friends /collaborators. He would go to the ends of the earth for them. Landon was predeceased by his Grampa Lloyd Craig, baby cousin Jackson Penner and maternal grandmother Donna Huska. Due to Covid-19 a private family service will take place and Landon will be laid to rest at Sparling Cemetery. Donations in memory of Landon may be made to Youth for Christ Brandon, #4, 1228 Rosser Avenue, Brandon, MB R7A 0L9.

"Family is bigger than blood. Love is always more than what you can trust.
A loving family is more than just a gift from you to me,
it's what is us." -Landon
Expressions of sympathy may be made at
www.memorieschapel.com