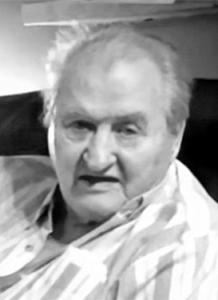 IWASIUK: Bill Iwasiuk. This past year has been such a trying time for everybody due to the pandemic. My mother and father were the other two covid survivors. Mom who is a three-time cancer survivor withstood her bout with COVID to come through a major outbreak at the seniors care facility she resides at. My father, living in the same seniors care facility managed to beat COVID while enduring COPD, prostate cancer and dementia. Miraculously, they were both deemed COVID-free by mid-December. However, things took a serious turn in late May when dad's health took another blow. We learned he had kidney disease which eventually lead to him suffering a stroke. He was placed in palliative care and soon succumbed to a combination of health issues. Dad died peacefully with his beloved wife Adrienne and their children Brenda, Mitch, and myself (Frank) by his side. Bill William Wasyl Iwasiuk was born in Clanwilliam, Manitoba on January 27th, 1936. The second youngest of 7 children to Michael and Mary Iwasiuk who retired in Minnedosa. Bill is preceded in death by his parents and his brothers Frankie, Walter, and Peter as well as his sister Helen. He is survived by his sisters Irene and Marge, his daughter Brenda Gloeden (Husband Kim), his son Mitchell (wife Kim Crystal), son Frankie (wife Gerri Tomsic) and son Bill. Bill is also survived by 7 grandkids and 4 great-grandkids. Bill left the family farm in Clanwilliam at the young age of 16. When he was in his teens he painted large structures such as grain elevators and even the old town clock tower on main street Minnedosa. He would eventually start his own business "Bill's Painting and Decorating" in the 60s. He moved the business out to Kelowna, BC. For a few years in the late 60s before coming back to raise his family in Brandon, Manitoba starting in the summer of 1970. While running his painting business Bill decided to branch out and started selling used cars from in front of the family acreage on Patricia Avenue. That venture lead to his next business venture "Town and Country Sales" which was first located at 18th & Brandon Avenue where he shared the old Pacific 66 gas station lot. Town & Country would then move to 18th Street south where the Mohawk station is now located. He would operate from that lot throughout the mid-70s to 1981. From 1981 – 1986 Bill fixed up houses for rentals and/or selling them. Then after a few years of semi-retirement, he decided to get back in the car game in 1987 relocating Town and Country Sales to the lot on First Street north near the Trans Canada Highway where the Mack business is now located. Bill would eventually retire in the early 90s. He kept himself occupied by fixing up and selling the odd vehicle for fun. Dad's affable personality mixed with his quick wit made him a pleasure to deal with and allowed him a long list of clients from many different walks of life. Bill was always a cheerleader for small business owners throughout the region. He always enjoyed sharing a humorous story with a twinkle in his eye and a warm smile. Along with his quick wit, he was known for his big heart. He will always be missed but remain in our hearts forever. Cremation will take place at White's Funeral Home. There will be a small ceremony at the southwest columbarium in the Minnedosa Cemetery at a date to be determined. In lieu of flowers, the family would appreciate donations made out to your local Cancer Society office.