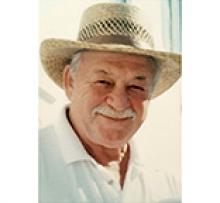 It's with great sadness we announce that George Francey, of Winnipeg, Manitoba, passed away peacefully on June 5, 2021. George was cared for with compassion and dignity by the wonderful staff at Donwood Manor in the last months of his life.
George was born in Winnipeg and lived most of his life in West Kildonan. He enjoyed gardening and golf and took great interest in the issues of his community and was a diehard Jets and Bombers fan. He worked many years as a boilermaker for CP Rail before retiring in 2000. In his younger years, George served in the Royal Canadian Navy and was stationed for a time in Halifax and Vancouver Island. He was a long-standing member of West Kildonan Legion Branch 30.
George was predeceased by his parents, John and Elizabeth (nee Bell) Francey; siblings, Jack Francey, Tom Francey, Jean Lamoureux, and Marlene Francey; wife Missy (nee Fisher) and sons, Michael and Stuart.
His quiet humour and easy-going nature will be missed by his children, Darren Francey (Michele Jarvie), Kelly Malowski (Doug) and Sean Francey (Shannon); and grandchildren, Riley (Jessie) and Reese, Connor and Marina. He is also remembered fondly by his former spouse Carole Trush (Larry). He is also survived by mother-in-law Bunny Mathieu, brother-in-law Allan Fisher, and numerous nieces and nephews.
COVID-19 restrictions prevent us from gathering right now, but we hope to give George a proper farewell at a more suitable time.
Anyone so wishing may donate in George's memory to the Heart & Stroke Foundation.