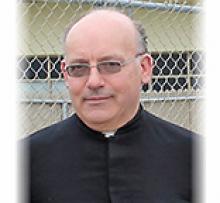 Rev. Djura Maljik, a priest of the Ukrainian Catholic Archeparchy of Winnipeg, fell asleep in the Lord on Wednesday, June 2, 2021, at his residence in Winnipeg, MB. The son of the late Velemir and Eufemifa (nee Salak) Maljik, he was born on July 14, 1953 in Kucura, Bachka Vojvodina, Yugoslavia.
He completed his elementary schooling in Kucura, then enrolled in the Ukrainian Minor Seminary in Rome in 1968, and graduated in 1973. He returned to Yugoslavia in 1973-1974 to fulfill his Military duty. Fr. Djura returned to Rome for further studies and received his Baccalaureates in Philosophy and Theology in 1980. He then continued his studies and
received a Master's degree in Spiritual
Theology in 1982.
Fr. Djura emigrated to Canada and on
January 23, 1983 he was ordained to the priesthood by Metropolitan Maxime Hermaniuk and was assigned as assistant
pastor at Sts. Vladimir & Olga Cathedral in Winnipeg.
In 1984 Fr. Djura was appointed pastor of the parishes in The Pas and Flin Flon, during which time he also undertook studies at the local community college to improve his knowledge of the English language. In 1988 Fr. Djura served in pastoral ministry in
Newark, New Jersey, and then returned to Manitoba where he was appointed parish priest in Gimli and district parishes.
From 1992, he next served the parishes in Winnipegosis, Ethelbert and Rorketon
district, and then from 1994 he served for
eleven years the parishes in Sandy Lake, Erickson, Elphinstone, Shoal Lake and Oakburn district.
From 2005 through 2014 he again served the parishes in The Pas, Flin Flon and
Thompson, during which time he celebrated his 25th anniversary of priestly ordination. In 2014, Fr. Djura moved back to Winnipeg where he ministered at St. Michael's Parish in Transcona, before taking sabbatical studies at Holy Spirit Seminary in Ottawa from 2015-2016.
From 2016, Fr. Djura was administrator for the missions in the South East pastoral
district and from 2019 he was appointed
pastor of St. Andrew's Parish in Winnipeg where he served until the time of his
unexpected passing.
Fr. Djura Maljik leaves to mourn his
brother Julian and family in Serbia, and his fellow clergy and parishioners of the Archeparchy of Winnipeg.
A private funeral liturgy under Covid-19 restrictions has been held, and burial has
taken place at All Saints Cemetery, Winnipeg.
Donations in memory of Fr. Djura Maljik can be made for the education of priests at Holy Spirit Ukrainian Catholic Seminary,
Edmonton AB, c/o Archeparchy of Winnipeg, 233 Scotia Street, Winnipeg MB R2V 1V7.
"Blessed are they whom You have chosen and taken to Yourself, O Lord, and their
memory shall be from generation to generation." (ps. 65:5)