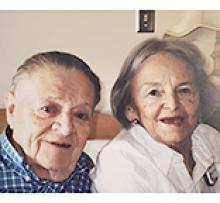 It is with great sadness that the family announces the passing of Edwin William (Pal) Hutchinson at Pioneer Manor in Sudbury on June 7, 2021.
Pal was born in Winnipeg, Manitoba on August 27, 1927, the second son of Marguerite and George Hutchinson and younger brother of Fred (called Bud).
Pal attended Daniel McIntyre Collegiate Institute in Winnipeg where he met his beloved Ruthie Bissett. He graduated from the University of Manitoba with his Bachelor of Science of Engineering (Civil) in May, 1949, the same month he and Ruth were married. They would be together for nearly 70 years! After working briefly for the CPR, Pal and Ruth began a productive career with Canada Cement (now Lafarge) in 1950. While developing their career, Pal and Ruth lived in almost every province in Canada. They made dear and lasting friends everywhere they lived. They finished their career in Vancouver where Pal became Manager of Manufacturing for the Pacific Region of Lafarge Canada. Pal retired in 1987 and he and Ruthie spent a wonderful retirement in North Vancouver, travelling to visit their children and grandchildren, taking extended winter vacations in Hawaii and Arizona and enjoying numerous ocean cruises. In 2005, when Ruth's health began to fail, they moved to Sudbury, Ontario to be nearer to their daughter, Gay, who supervised their care wonderfully from that point onward.
Pal lost his beloved Ruthie in 2016 - the 68th year of their marriage. He was the much loved and loving father of Barrie (Susie), Gay Lundy (Craig), Mark (Sandi) and Brent (Susy); the beloved grandfather of Calder, Jim, George, Jessica, Marshall, Shirley and Kelly; and the beloved great-grandfather of Tessa, Audrey, Eleanor and Ben. Pal was predeceased by his brother Bud (Mary d.) in Portland, Oregon in 2011 and is survived by his six nieces and nephews in Oregon. He is also survived by Ruth's brother and sisters: Joe Bissett (Leslie), Brenda Jackson (Doug), and Dana Littlewood (John) and their families.
The Hutchinson family's many moves seem to have drawn them closer and they remain a close and loving family to this day. Pal was the beloved patriarch - forever kind, loving and supportive. He maintained his sense of humour to the end, always searching for a pun or joke to suit the occasion. His was a long, happy life well-lived and he will be sorely missed.
In keeping with Pal and Ruth's pre-arrangements, Pal's remains have been cremated. They will be transported to North Vancouver where they will rest beside Ruth's in a memorial wall overlooking a pond in the beautiful First Memorial Gardens. The family will hold a Celebration of Life there for both Ruth and Pal when Covid restrictions and common sense permit.
We wish to thank Pioneer Manor for their exemplary and compassionate care of both Pal and Ruth. Donations to Pioneer Manor Caring Forever Tree in Ruth and Pal's honour would be appreciated.