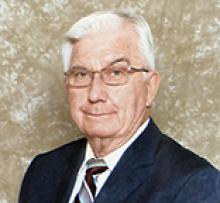 Jack passed away suddenly on May 31, 2021, at the age of 84.
Jack is survived by his son Dave (Crystal) of Fort McMurray; daughter Danielle (Terry); their mother Joanne; granddaughter Charlie of Saskatoon; niece Dallas (Brendan); nephew Dylan (Martine) and their two children, Piper and Lainey. He was predeceased by his parents, Edwin (Ted) and Marjorie; brother Bruce; and sister-in-law Leslie Loundsbury.
Jack was born in Carman, Manitoba but was raised on a farm south of Miami. He graduated from the Miami High School, received a B.SC (EE) in 1959 from the University of Manitoba, and a MBA from Queen's University, Kingston, Ontario in 1954.
In lieu of flowers, donations can be made to the Baseball Hall of Fame, or The Curl Manitoba Strathcona Trust Fund c/o The Winnipeg Foundation or a charity of one's choice.
A celebration of Jack's life will be announced at a later date, when we are safely able to come together with interment of his ashes in Miami, Manitoba. In the meantime, Jack's family kindly requests that his friends and relatives take a few minutes to honour his memory by visiting his tribute page at EthicalDeathCare.com. A photo-biography, as well as memories and stories published by those who knew him, are available there.