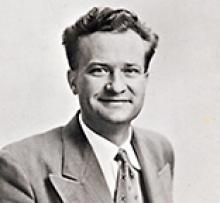 Predeceased by his beloved wife, Wiltrud, in 2000, after nearly 50 happy years of marriage.
Survived by his loving children, John (Anna), Robert (Alicia), Kathy (Andres), Richard (Wendy), and Lise (Neil). Also his wonderful grandchildren, Alexander, Nicholas, Adam, Amanda, Alexi, Elka, Maggie, and Gabrielle.
Harold attended the University of Manitoba from 1944 to 1948, and started his career in the Pharmaceutical Industry in 1949, with A.H. Robins (now Pfizer/GSK). Subsequent to several promotions Harold became President of the Company in 1960, and retained that position until his retirement in 1990. During that time he also served as President of Perfumerie Caron and Miller-Morton Pet Care Company. As well, Harold served on the Boards of several Companies and Associations. He was also a member of Summerlea Golf and Country Club and the Royal St. Lawrence Yacht Club.
Harold is remembered as a caring and loving Father, as an inspirational Grandfather, and as a pillar of the Pharmaceutical Industry.
Harold will be greatly missed.
As expressions of sympathy, memorial donations in memory of Harold to the ALS Society would be appreciated by the family.


Letters of condolence, shared stories and
memorial donations may be left for the
family online at www.mckersie-kocher.ca