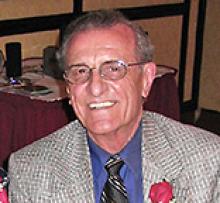 With heavy hearts of grief, we announce the passing of our father, friend, husband, brother and grandfather - Peter M. Pauls on June 9, 2021.
He is lovingly remembered by his wife of 63 years, Madeline May Pauls (nee Pries), his son Ken Pauls and Maria Steeds, his son Steven Pauls and Melody Driedger, along with his three grandchildren, Dylan, Haley and Adam Pauls, as well as his three stepgrandchildren, Christian, Julian and Gabriel Steeds. He is survived by his siblings, Rev. Jacob Pauls (Dorothy), Tinie Sawatzky, Mary Giesbrecht, John Pauls (Norma), and Alvin Pauls (Judith). Peter was predeceased by his father Rev. Jacob M. Pauls, his mother Maria Pauls (nee Funk), and his brother Harry Pauls (Elizabeth).
Peter was born on December 14, 1933, on a farm near Morden, Manitoba. He attended various local and Mennonite schools, eventually attending Winkler Collegiate in grade 12 where he met Madeline Pries, whom he married on July 25, 1957. Peter then embarked on his academic journey that led him to many institutions as both student and teacher, including local public schools, the Universities of Manitoba, Winnipeg, and the University of Wisconsin where he earned his PhD.
Peter spent the next thirty years in academia as a professor of English at the University of Winnipeg, developing his expertise in Shakespeare, Milton and Chaucer. He also honed his abilities as a lecturer, translator of low German and researcher. Along with his career, his family and sons Ken and Steven made him proud and motivated him.
During the autumn years, Peter spent much time travelling with his dear wife and spending time with his beloved grandchildren. These years were perhaps the happiest of all. Even near the end, a twinkle formed in Peter's eyes when the grandkids stopped by. We are truly grateful for all the love and protection that he offered us all.
Peter expressed his thanks to CancerCare Manitoba, Dr. Alvin Schroeder who was both a mentor and friend, Dr. Joel Gingerich and Dr. Patrick Cho who provided superb support for him over the final years.
Donations in Peter's memory can be made to CancerCare Manitoba or Manitoba Central Committee.
Service livestreaming information regarding the memorial service on Thursday June 17, 2021 may be found on the Friends Funeral Service website: www.friendsfs.ca Make a donation to