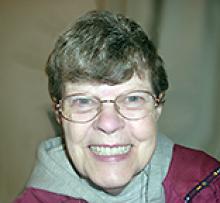 Gayle peacefully passed away just as the sun was beginning to set on Victoria Day.
Gayle Telford Mann was born and grew up in Winnipeg, Manitoba. She graduated from Kelvin High School in 1955. A couple of years after graduation, she left Winnipeg and attended Minneapolis Business College in Minnesota. She met Russell Mann in 1957 and they wed on June 17, 1960, sharing 61 years together this year.
Gayle will be sadly missed by her husband; three sons, Wesley, Scott and Bradley and their partners; four grandchildren, Amber, Mikhayala, Emily and Kaden; and extended family members including nephews and nieces. Gayle will also be missed by her friends, neighbours, and former work colleagues.
She was predeceased by her grandfather George Latimer, her grandmother Marguerite Latimer; her mother Ruth Mavis, and her sister Sharon Telford.
Gayle began her professional career with Western Gypsum Products, and then worked for the Canadian Diabetes Association for over 10 years. While with CDA, she earned her Certified General Accountant diploma. She moved on to work with Manitoba Public Insurance where she retired after a long and successful career. Her husband completed his career the same day so they were able to celebrate their retirement together.
One of Gayle's greatest loves was the 25 years spent at the family cabin at Caddy Lake in the Whiteshell during all seasons. She was an avid Titanic historian, having had a relative, Andrew Latimer who perished when the Titanic sank in 1912. Thus began her interest and enthusiasm in family genealogy. In 2011, Gayle fulfilled a lifelong dream of travelling to Australia to do further research. She enjoyed many family vacations and road trips during her lifetime.
In lieu of flowers, donations may be offered to the Canadian Cancer Society or to Riverview Palliative Care where Gayle's care in the last days of her life were exemplary.
Cremation will take place and a private interment will be held at a later date.