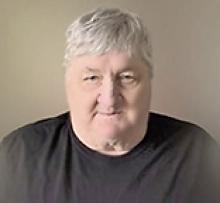 It is with deep sorrow that we announce the sudden passing of Leslie Terrence Balan, at his home in Warren, MB, at the age of 80 years.
Dad will be lovingly remembered by his wife of 56 and a half years, Brenda; daughters, Gerri (Vern), Jodi (Jeev), son Jayson (Andrea); grandchildren, Jared, Jensen, Justin, Jessica, Jayden, Owen and Evan; as well as brothers, Carl, John (Elaine), sisters, Dianne (Phil) and Barbara (Ken); in-laws, Peggy and Jim; and many nieces, nephews and cousins. Dad was predeceased by son Jeff; parents, Cozma and Vera; brothers, George and Alex; and sisters, Bonnie and Helene.
Dad was born in Winnipeg, Manitoba, one of nine children growing up on the family farm in Woodlands MB. Dad and Mom were married in 1964 and started their married life living on his parent's farm before starting their own family on a small farm in Warren. Though an electrician by trade, his heart was in farming and the farm was ever evolving with geese, chickens, pigs, cattle and horses over the years. The farm holds a special place in the hearts of the many friends and family who spent time with Dad there.
Dad worked a few different jobs (Thompson mines, Atlas Electric and Comstock) before taking a year off in 1966 to help Grandpa build the Woodlands Hotel. Most of Dad's working years after this were spent with Balan Electric and in later years, with the Interlake School Division. Dad was always on call to help any neighbour in need when they had electrical issues. Seems he could fix anything with a pair of side cutters and his Amprobe. Those service calls most often ended with a cold beer and a visit.
Dad was a great storyteller. One thing about his stories was that he never embellished them as time went on. No matter how many times we heard a story, it was always the same. Some of his favourites were of his early working years up north with Comstock. He was truly at home in those camps.
In his later years, he could be found having afternoon coffee in Warren and Woodlands and then patrolling the back roads and drainage ditches, checking in on neighbours. He often enjoyed sitting at a crossing watching the local farmers seeding in the spring or harvesting in the fall. He was in awe of how quickly they could be in and out of a field these days. If you couldn't find him out and about, he could be found out back by the pond, sitting in his truck with the windows down reading a book.
Dad, today our hearts are breaking, and we miss you so much already. What we wouldn't give for just one more moment together, one more game of checkers, one more drive to the pasture, even one more lecture. You loved us fiercely and taught us tough lessons that we may not have understood at the time but so appreciate now.
Dad was laid to rest on June 5, 2021, at the Woodlands Cemetery. Due to the current restrictions in place, we have decided to have a Celebration of Life at a later date.
In lieu of flowers, donations can be made to the Woodlands Pioneer Museum.