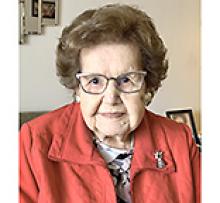 Kathleen Dewar (née Massey) passed away peacefully on the evening of June 8, 2021 with family at her side. Kaye had just reached her 98th birthday on March 8 and was the matriarch of her family of six children, eight grandchildren and four great-grandchildren, with another great-grandchild due this fall. She loved them all very much, and they adored her in return.
Kaye was the oldest living Massey, having survived all five of her siblings. She'd also been challenged by the loss of the love of her life, Stewart, in 2004, and her beloved granddaughter Kirstin in 2014. She also dearly missed her sister and best friend, Doreen Massey, who passed away in 2019.
Kaye loved music, especially playing the piano for other people, something she was doing just nine days before she passed. She was also the organist at the Cloverdale United Church, retiring in 2000 after 30 years. If there was a piano in the room, you would find Kaye seated at it, entertaining all those around her. Her last big performance was on her most recent birthday, playing for a small audience of family members. She was thrilled that her love of music was passed on, and that many of her children and grandchildren have followed in her footsteps as musicians and vocalists.
Kaye had deep roots in Selkirk. Born there in 1923, her father, Ben Massey, was the Mayor from 1958-1965, and Kaye knew countless people in the town of her birth. As the family historian, she could put names to faces in most photos in her collection.
After marrying Stewart Dewar in 1950, Kaye moved to the home Stewart built in Cloverdale, where Kaye relished her role as a farm wife. It was hard work, but she and Stewart enjoyed the simple pleasures of life in the country, raising six children, as well as farming grain and cattle. Living across the road from her mother-in-law, Kaye became equally well-versed in the Dewar family history and their connection to the land close to Oak Hammock Marsh.
Kaye was a natural beauty and took pride in her appearance. She loved wearing bright colours, beautiful clothes and jewelery. That was Kaye's signature style. She had an active social life and a large circle of friends, many of whom lived in the Lion's Centre, which Kaye called home for the last ten years. She was always ready to greet visitors with a smile and a cup of tea.
Prior to marriage, Kaye worked as a secretary at the Legislative Building in Winnipeg, and after her children were grown, she started a new career as a home care worker. She enjoyed earning her own money, as well as the chance to help others. Kaye cherished her independence and was proud that she remained in her own apartment until the end.
She was an intelligent and curious woman, still reading the newspaper every day, checking out numerous books from the library every week, and completing the daily crosswords and word searches. She was also a very funny woman, entertaining whoever she happened to be around, and was always the life of any party she happened to be at. She was also a good friend, and those around her treasured the advice and support she gave them.
Mom was our rock and it will certainly never be the same without her.
Left to celebrate Kaye's life and to cherish their many memories are her children, Gary (Heather), Karen (Bob) Lorenz, Randy (Karen), Greg (Kathleen), Allison and Laurie (Rick) Sutherland, as well as grandchildren, Camryn Dewar, Andrew Lorenz (Cassandra Smith), Brent (Marilyne) Dewar, Nicole Dewar, Shea Dewar (Jessica Smith), Kathleen 'Katie' Sutherland and Kelsey Sutherland (Kylie Timmerman). Kaye held a special place in her heart for her great-grandchildren, Xavier Snider, Nate Lorenz, Scott Dewar and Myla Mae Dewar. Kaye was also pleased to be called Mom and Grandma by friends of her family.
The family is grateful for all the support, friendship and care that Kaye received. They'd like to thank the home care workers who made it possible for her to stay in her apartment and Dr. Shoewu for his compassionate care.
Donations in Kaye's memory can be made to Kirstin's Walk for Kids, through the Selkirk and District Community Foundation (www.sdcf.ca) or to the Cloverdale United Church Fund, c/o Mary Ann Millar, 805 Cloverdale Road, St. Andrews, MB R1A 4J8.
No funeral is planned at this time due to COVID-19 restrictions. A memorial service is tentatively planned for later this year.