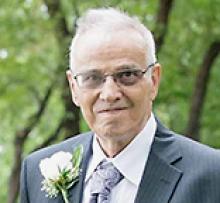 It is with great sadness that we announce the passing of Abilio Augusto Batista, 83, on Sunday, June 6, at Grace Hospital.
He is predeceased by his parents, João and Ermelinda; sister Nelza Braz and brother-in-law João Baptista Braz. Abilio will be remembered by his beloved wife of nearly 60 years, Emilia; son Joe (Paula); daughters, Maria (Luis) and Lucy (Jan); six grandchildren, Jonathan, David, Sabrina, Albert, Emilia, Daniella and five great-grandchildren, as well as his brother José Manuel Braz (Isabel), nephews, nieces, extended family and friends, both here and in Portugal.
Abilio was born and raised in the small village of Ribeirinha, Trás-os-Montes, Portugal where he married the love of his life, Emilia, in 1961. As a hard-working man who wanted the best for his family, he later immigrated to Canada in 1969, where he worked for CN Rail. Abilio loved the outdoors. He enjoyed hunting and fishing, but most of all, he loved tending to his garden. He had a great appetite and enjoyed hearty meals, his homemade wines and the company of his family and friends. During retirement, he remained active in his garden, tinkering in the garage, taking daily walks with his wife and spending time with his grandchildren until recently, when he was no longer able.
A special thanks to the staff of Grace Hospital for their care and compassion, as well as those who have reached out to share their love and support during this difficult time.

The Viewing was held on the evening of June 9th at Cropo Funeral Chapel and Mass of Christian Burial was celebrated on June 10th at Immaculate Conception Parish followed by Interment at Assumption Cemetery.

In lieu of flowers, donations can be made in Abilio's memory to a charity of choice or the Heart and Stroke Foundation of Manitoba.