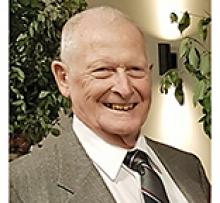 It is with deep sadness that we announce the passing of our loving and caring brother, father and grandfather, Lloyd Rigby, on Wednesday, June 9 in his 91st year.
Left to mourn his passing is his sister, Linda Smith of Winnipeg, children, David (Erin) of Calgary, AB, Barbara Brown of Steinbach, MB and two grandsons that he adored, Parker Brown and Braeden Rigby, as well as cousins - the Allenby family of Winnipeg, the Ward family of Fort Qu'Appelle, SK, and many friends near and far.
Lloyd was predeceased by his wife Beverley in 1993 and his special companion of 23 years, Isabel Saunders in 2018.
A lifelong Winnipegger, Lloyd spent his formative years in the North End, graduating from Isaac Newton High School in 1949. In 1950 Lloyd joined the Manitoba Telephone System where he spent his entire 39 year career. In the spring of 1989 he retired from MTS as the Supervisor of the Long Range Planning Division. Early on in his career at MTS he met his wife Beverley and they married in July, 1963. In the following years they started their family, residing in the Westwood area for the next 35 years.
Always active in a variety of sports, Lloyd was most proud of his affiliation with the Elmwood Giants Baseball Club as a player and coach and then as a scout for the St. Boniface Canadiens in the 1950s pro sponsorship era. He was also an active curler for many years both at the Wildewood and Deer Lodge Curling Clubs. For the last 35 years you could always find him at his second home on the fairways of the Teulon Golf & Country Club, in the stands at Assiniboia Downs or Turf Paradise in Phoenix, or on the deck of the family cottage at Whytewold Beach and Isabel's cottage at Falcon Lake.
The family would like to thank all the doctors, nurses and staff on RR6 at Health Sciences Centre and the staff at Ste. Anne Hospital for all of their help and compassion in the past several weeks.
In accordance with Lloyd's wishes there will be no service. A private family interment will occur at a later date.
In lieu of flowers, donations can be made to Heart & Stroke Foundation of Manitoba, the Grace Hospital Foundation or the charity of your choice.