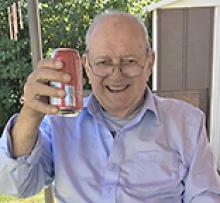 Thomas Davis Beaton, aka Dave/Davis formerly of Thorburn, Nova Scotia, gained his angel wings on Sunday, June 6, 2021. He passed away at age 89, just short of his 90th birthday.
He is survived by his wife Doreen Morgan and predeceased by his wife Marjorie Arthrell.
Davis is predeceased by his parents, Walter Davis Beaton and Allison Rennie-Dunn Kirkwood of Nova Scotia; his brother Bob Beaton and two sisters, Betty (Elizabeth) McCallum and Marilyn Purvis.
He is survived by his brother Malcolm Graeme Beaton (Graeme).
Davis was a loving father to Susan (Dawe), Shari (Diotte), Leanne (and Ed Miller), Alan Beaton (and Shawna).
He is remembered by his eight grandchildren with so much love - Allan, Becky, Jonathan, Clayton, Cassidy and Holley, Matthew and Sara and his two great-grandchildren, Charlie and Josephine.
He is loved by his brother-in-laws and sister-in-laws, Sylvia and Ray Field, Pat and Bill Davis, Peg and Don Crath, Jim and Angie Arthrell and Kim Taylor and remembered by his stepfamily, Cheryl, Jeff, Grace and William Bradley in New Brunswick and Doreen's family in Winnipeg.
Davis grew up in Nova Scotia. He joined the military and married Marjorie. He was transferred to Winnipeg, PEI, Germany, BC and back to Winnipeg where they raised their family together. He retired in Winnipeg to become a Commissionaire at Deer Lodge Hospital. In each place they moved, Davis always found the best fishing holes. Davis married Doreen almost six years ago and together they enjoyed many road trips.
Davis loved his children, grandchildren, and great-grandchildren very much. As our father would say - Here's mud in your eye! A perfect way to say so long to a wonderful man!
A cremation and a private interment will follow and Celebration of Life will be planned when everyone can get together once again.