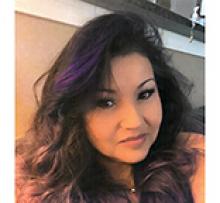 Born on June 3, 1965, to Eva Paupanekis, and William Paupanekis in Winnipeg Manitoba.
Miranda, an only child, spent the first few years of her life in Norway House with her Grandmother Delia Paupanekis before moving back to Winnipeg at the age of three. She was raised by her grandmother Delia but was very close with her father, mother and stepfather Jim Reid.
She was known by the nickname "Mandy" amongst her family.
She went to various schools around the City of Winnipeg and made many lifelong friends along the way.
Miranda worked in various places throughout her life but mostly stayed in the customer service industry. She was well equipped with empathy, kindness, love, and the right amount of patience to handle such an occupation. Again, she made many lifelong friends from these places as well.
Miranda had a love of music from almost every genre. Classic Rock was amongst her top favourite and even though she did not care for opera she made it well known she made an exception for "Phantom of the Opera" and of course nothing could top her Beloved Prince.
Miranda was married to Joseph Fourre on October 18, 1986 and together they had four children, Rochelle (Roch), Nicole (Woodtick), Harlan (Everloving son) and Dylan (ButtonHead). They were married for 24 years before parting ways.
Along her journey she met Russell "Rusty" Hastings who was her partner until the end. Miranda and Rusty spent most of their time travelling and having a youthful, playful, romantic relationship.
Miranda was honourable. She was a kind, loving soul, with a heart of gold. She was deeply passionate about life and its greatest gifts. She put others before herself, and always had so much love to give. She had many cousins and friends she considered sisters and brothers.
Miranda was residing with, and taking care of, her stepfather Jim Reid when she suddenly passed at the age of 56 in the early morning of June 3, 2021, in Winnipeg.
Predeceased by her grandmother Delia Paupanekis, mother Eva Paupanekis (Longclaws) father William Paupanekis, Auntie Marion Muswagon, Uncle Joe Paupanekis, Auntie Tilda Paupenekis, uncles: Edwin Longclaws, Wilfred Longclaws, Lawrence Longclaws, Aunt Caroline Gordon (Longclaws), her Uncle William Johnston, beloved cousins, Donny Johnston, William "Dootsy" Muswagon, Gerald Muswagon, Former in-laws Fourre: Ed Fourre, Edna Fourre, Allan (Boxer) Fourre, Darlene "Berly" Dahr, nieces, Charmaine (Comeau), Brandy Hanslip, Irene Garneau (nee Houle) and Cheyenne Hastings.
Miranda is survived by stepfather Jim Reid, daughter Rochelle Dyrkacz (Fourre) and her husband Dion Dyrkacz; daughter Nicole LaBossiere (Fourre) and her husband Brendan Labossiere; sons, Harlan Fourre and Dylan Fourre; stepdaughter Michelle Anderson, partner Russell Hastings and family, granddaughters, Evasia Dyrkacz, Orianne Dyrkacz, grandson Aurelio Labossiere, and many more.
There will be a private service on June 12, 2021 at the Thomson "In The Park" Funeral Home at 2:00 p.m. Eileen Apetagon will officiate.