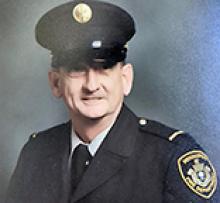 It is with deep sadness we announce the passing of Gerald Bruce Smith. Born in Winnipeg on May 8, 1937 and passed on May 26, 2021, at age 84.
Gerald was predeceased by his loving wife, Barbara. He is survived by his first wife Cathy, mother to his three boys, Douglas (Krista), David (Shannon), Roger (Linda), and his stepsons, Denis (Donna) and Louis who will miss him greatly. He also leaves to mourn his sister, Janet (Douglas), his nephews Mike, Scott, and his six grandchildren, Ashley, Kathryn, Amanda, Jamie, Amber and Cassandra.
In Gerry's earlier years he worked at The Bay, was in the Canadian Air Force and then started his career with the Winnipeg Fire Department (WFD) in 1960. He became a Captain in the WFD in 1990 and retired in 1994, giving him time to do the things he loved. He would spend countless hours in his workshop making...you name it, out of different woods. He put many kilometres on his vehicles, doing road trips, going camping and travelling all over the Continent. Another passion he enjoyed was skydiving, that brought out his wild side. Gerry was also proud of his involvement in Scouts Canada, where he shared many skills. He has left us with so many amazing memories, which we will all hold onto forever. We are going to miss you "Old Fart".