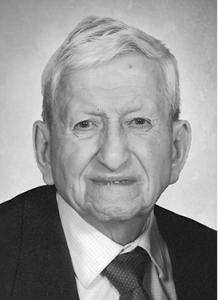 WARNICK: William H. "Big Bill and The Bear" Warnick passed away peacefully at his residence, Hillcrest Personal Care Home, on Friday, June 11, 2021 at the age of 92. Bill was born on January 14, 1929 in Brandon, Manitoba to William and Annie Woroniak. He was one of seven children. As a young boy Bill attended elementary school in Kemnay, MB and then high school in Brandon at Brandon Collegiate Institute. Bill spent much of his younger years with a passion for sports. He loved the game of hockey; was the leading scorer for both the Brandon Athletics and the Brandon Elks. Bill had the privilege of trying out for the Montreal Canadiens; a highlight of his hockey career. After high school, he worked for Imperial Taxi and then was employed by Canadian Pacific Railway as both a conductor and engineer. He worked for the CPR until he retired at the age of 60. Bill married the love of his life, Phyllis in 1952. Together Bill and Phyllis built their own home on Frederick Street in Brandon, living in that home for 60 years before moving to Lion's Manor. Bill and Phyllis loved to travel. In 1978, they travelled to Poland and the surrounding countries in Europe. They loved road trips to visit family and friends across Canada and the USA. Kindness and patience were two of Bill's greatest virtues. He often showed these characteristics during card games with his family. He preferred losing at family card games so that we would win and often would deal us in when you should have been out. Bill was a people person, he loved to entertain, dance and crack a good joke. He was the life of any party he attended. He found joy in entertaining at home as well. The door was always open and food and drink were on the table. Everyone was always welcome. Bill was an active member of the Catholic church, Knights of Columbus and the CPR Association. Bill is survived by his wife of 69 years, Phyllis L. Warnick; son Bill (Deborah); daughter, Jan (Terry), grandchildren Bill Jr. (Debra), Jeremy (Treena), Alana (Marla), Tara (Lonnie), Kerri (Dave) and Cristy (Jason); great-grandchildren, Owen, Shea, Brooklynn, Makayla, Smith, Brek, Jaeda, Rorie and Addison. He was predeceased by his parents, William and Annie Woroniak; sisters, Kaye Dunn, Mary Slobodian, Helen Prost; brothers, Peter Warnick, Walter Warnick and Steve Warnick. Mass of Christian Burial was held at St. Augustine's Roman Catholic Church on Tuesday, June 15, 2021 with Fr. John Okosun as celebrant. Interment followed at the Brandon Cemetery. Pallbearers were Bill Jr. Warnick, Jeremy Warnick, Alana Warnick, Tara Liske, Kerri Pleskach, and Cristy Law. The Warnick family would like to extend a heartfelt thank you to the staff at Hillcrest Personal Care Home. We are grateful for the dedication and compassionate care he received during his stay. In lieu of flowers, donations in memory of Bill may be made to a charity of choice.