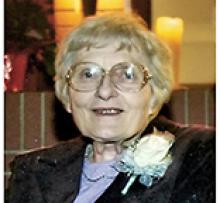 Margaret Mary Waytowich (Steciuk) passed away in the early hours of June 12, 2021, at the Convalescent Home of Winnipeg. With her son faithfully and lovingly by her side, Margaret took her last breath with a smile of relief and submission on her face.
Margaret was born on July 4, 1933, in the Redditt area close to Kenora, Ontario. She was the eldest child to John and Vera Steciuk. Her family moved to the Winnipeg Beach area when she was just a young child. Margaret had many fond memories growing up in this close-knit community making many lifelong friends during this time. Later, as a young adult, she spent close to a year recovering from tuberculosis. After her release from the TB sanatorium, Margaret went on to attend college and then worked for the Manitoba Telephone System. During this time, while attending a dance, Margaret met her future husband, Ernie Waytowich. They went on to marry in October of 1960. They settled in Winnipeg but spent many happy summers at Winnipeg Beach. Ernie predeceased Margaret in 1991.
Margaret was heartbroken by his untimely death, but she persevered on, as life insists, learning to do many new tasks with independence. Her son, James continued to support and help his mom carry on after the death of Ernie.
Margaret was fiercely loyal to her family, friends, and neighbours. She was a devoted member of Sts. Vladimir and Olga Ukrainian Catholic Parish. Though Margaret experienced much loss during the course of her life, she never faltered in her faith in God. She found solace in the traditions of her faith and heritage. She was always willing to help those who were less fortunate and in need. Margaret loved the simple things life had to offer like the vegetables and flowers growing in her well tended garden, the singing of the birds, and her many pets, especially her dog, sweet "Annie".
In addition to her husband, Margaret was predeceased by her parents, her brother, Victor and sister, Sonia and her brother-in-law, Don. Deeply mourning her loss is her son, James (Carole and family). Also, her nephew Donny and his children and grandchildren.
The family thanks the many staff at the Convalescent Home of Winnipeg for their devotion and vigilance in caring for Margaret. Their dedication to Margaret is deeply appreciated. The family gratefully declines flowers, but instead, if you wish, consider a donation to the "The Home" or a charity of your choice.
Due to Covid restrictions, the family will be having a public Funeral Liturgy at a later date.