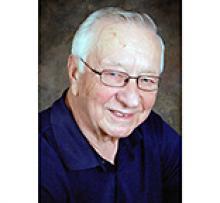 In a room filled with love, music and tears our dear Todd passed away on June 11, 2021, at the age of 87.
Todd (Metody) Sawchuk was born on the family farm near the town of Mountain Road, high on the Manitoba escarpment to William and Pauline Sawchuk, on Valentine's Day, February 14, 1934. He attended a one room school in Birnie, Manitoba and then Neepawa Collegiate. Todd was employed by the Bank of Commerce for 36 years. After retirement he sold real estate and later worked for Adessa, driving cars and spending time with his pals.
On January 13, 1956 Todd met the love of his life, Shirley, at the Rainbow Dance Garden when she was just 17 and he was 22. They were married in 1959 and have been dancing together ever since. Sweethearts forever, they will keep on swaying from now until eternity. Shirley grieves but carries Todd in her heart.
Todd was a musician, an accordionist by training, who could play any instrument that you put into his hands. He was a member of the Sawchuk family band, the Melody Makers, with his beloved sister Rita, a fiddler. Grandpa William drummed while brother Don played guitar.
Shirley and Todd were blessed with four children, Kim, Corey, Darren and Dale. From their father, the kids learned the value of family and friends. He imparted a love of music, an addiction to cards, and a taste for the open road and campfires. Cousins, grandparents, aunts and uncles helped to build a family cottage at Hillside Beach, the site of many lively parties and adventures on the high seas of Lake Winnipeg. Sadly, we lost Darren in 2017. Like his father, Darren was a brilliant musician. We are comforted in the certainty that Todd is entertaining the angels and playing a tune with Darren, Rita and Grandpa.
Todd was a devoted husband and father, a fun-loving grandfather to Alyssa, Conlin, Nicholas, Danton, Jennifer, Jordan, Kiah, Foster and Griffin, a step-grandpa to Joël and Yves, and immensely proud of his great-grandchild, baby Henry. Todd's nieces and nephews (Tressa, Derek, Cheryl, Tyson, Joanne, Randy, David, Kenny and Cindy and their spouses) all loved their Uncle Todd. So did his children's partners, Robert, Krista, Tani and Chris and his in-laws, Jean and Tiny (both deceased), Walter and Eve, George and Rita (deceased) and Don and Brenda.
Todd was an avid traveller. He and Shirley spent 18 wonderful winters in Magic Valley, Westlaco, TX, where they made many good friends. They ventured to Europe three times, including taking a memorable trip to the homeland of their ancestors, Ukraine.
Everyone who met Todd loved him. A genuinely nice man, Todd nevertheless had a wicked sense of humour and loved to tease. Possessing the soul of an artist, our dear Todd has left behind a legacy of carvings, of tunes, and so much more. He was a gentle inspiration to all who had the good fortune to meet him or hear him play. He was our quiet superhero. We miss this extraordinary and kind person already, but we know he is with us every day and he always will be.
The family thanks the nurses, doctors and staff at St. Boniface Hospital who provided exemplary care to Todd over the years. A special thanks to Dr. Randy Guzman and Dr. Taras Gwozdecki. We also acknowledge the palliative care team and care workers who visited Todd every day these past months. They too became friends.
We miss you Todd, and we raise a toast of "Boost and Baileys" in your honour. Thank you for all you have taught us, all that you have given, and the love that you have so generously shared with so many in your special Todd way.
We invite you to visit Todd's virtual memorial site (including a live stream of his service) at www.cropo.com and to share an image, a story, or a favourite song in his memory.
In lieu of flowers, donations may be made to St. Boniface Hospital Foundation.